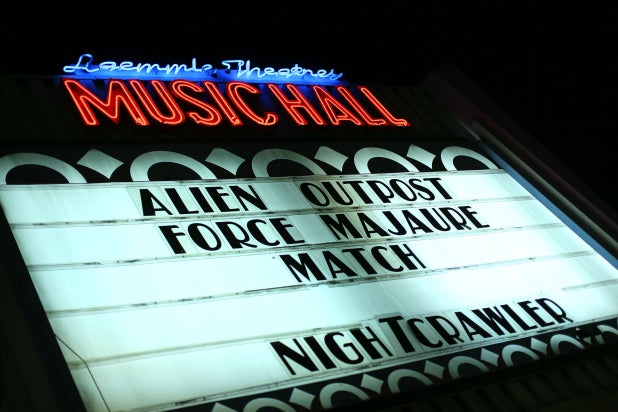 Greg Laemmle, president of the 80-year-old family-owned exhibitor, told the Los Angeles Times this week that they ultimately decided the reward of continuing to own the theaters and show art-house films outweighed that of selling, and the risk that comes with owning indie theaters.

“The market has improved, which gives us some flexibility on some level,” Laemmle told the L.A. Times. “I never thought what we were seeing was a fundamental change in audience’s interest in moviegoing.”

Laemmle did, however, have to board up the doors to the more than 80-year-old Music Hall theater in Beverly Hills, which Laemmle has owned and operated for more than four decades.

In a post on the theater’s website, the theater operator said it’s possible for the theater, located at 9036 Wilshire Boulevard to experience a return to glory, but that if it happens “It will be after a hiatus and with different operators.”

“It has been my family’s privilege to operate the Music Hall for 45 years but it’s time to end our stewardship,” Laemmle said in a statement on the company’s website. “For the sake of efficiency, we plan to use the other screens in our circuit to provide a platform for the types of films we’ve been showing in Beverly Hills.”

Laemmle told the L.A. Times that through the first six months of 2019, the theater chain saw box office fall as much as 30%. He said business has improved in recent months, but they expect ticket sales to be down between 10% and 20% for the year.

The theater chain’s struggles this year are indicative of the state that independently owned specialty cinemas find themselves.

The challenges of smaller theaters have been exemplified by Landmark’s sale to Cohen Media Group at the tail end of 2018, as well as the shuttering of New York City’s last single-screen theater, the Paris Theatre, in August.

Laemmle’s theater circuit includes locations in Claremont, Glendale, Santa Monica, North Hollywood, Pasadena, West Los Angeles and Encino. And it runs with roughly 200 employees, including 60 to 70 full-time staff, according to the L.A. Times.