The downtown experiment, it seems, was a success.

The Los Angeles Film Festival wrapped up on Sunday after an 11-day run in downtown Los Angeles, a far cry from its former homes in Westwood and Hollywood.  And the response, for the most part, was positive.

“You can plan up to a certain point, but eventually you just have to take a chance and hope for the best,” Sid Ganis, a member of Film Independent’s board of directors, told FIND executive director Dawn Hudson at the awards announcement on Saturday.  “And I think it was great.” 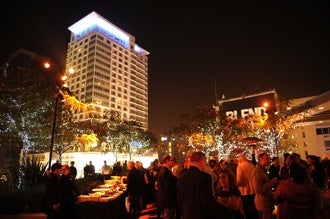 Festival director Rebecca Yeldham called this year’s LAFF “a magnificent experience” – and in the 10-year history of FIND’s stewardship of the festival, it was certainly a unique one.

It kicked off with an opening-night screening a block from where the Lakers were playing the deciding Game 7 of the NBA championship series. A week and a half later, its winners were announced in a restaurant where a TV at the rear of the room was playing the final U.S. game in the World Cup tournament.

It threatened to be overshadowed by a movie about teen vampires and werewolves, the world premiere of “The Twilight Saga: Eclipse,” even as it showed a lineup mostly of serious, low-budget indie films.

It flew in the face of conventional wisdom that said L.A.’s Westsiders wouldn’t fight the traffic to go to downtown's L.A. Live campus, but somehow managed to sell out screenings of small films and documentaries that might ordinarily have a hard time drawing a half house to the Arclight or Landmark on a weeknight.

In between the Lakers and the Twi-hards, history will show that “A Family” and “Make Believe” won the jury prizes, “Four Lions” and “Thunder Soul” the audience awards.

But film festivals are rarely about consensus – they’re too spread out for that, with far too many movies for every festivalgoer to have the same experience with the same films.  One person might have loved “Revolucion” and “Golden Slumber,” while the next missed both of them but flipped for “The People Vs. George Lucas” and “Bitter Feast.”

So here, looking back at the festival, is one experience – mine. It was frustrating at times (for every movie I saw, I added one or two to my list of films I wanted to see but couldn’t get to), but also a satisfying 11 days of cinema. 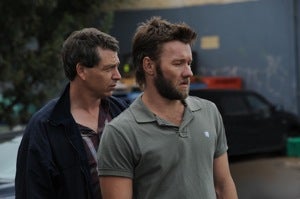 Favorite narrative film:  “Animal Kingdom” (right)  David Michod’s Australian crime drama – a touch of “Goodfellas,” a hint of “A Prophet” – quietly rachets up the tension, and features remarkable performances from Ben Mendelsohn and Jacki Weaver, among others.

Runners-up: “Four Lions” (hapless would-be suicide bombers in a profane, hilarious, politically incorrect comedy in the vein of “In the Loop”), “The Kids Are All Right” (a subtle, strong, wonderfully-acted family drama from Lisa Cholodenko).

Narrative features I wish I’d seen: Way too many to mention.  But I’ll start with “Monster,” and “White Material,” and “Tiny Furniture.”  Oh, and “Mahler on the Couch,” “The New Year,” “The Wolf Knife,” “Eastern Plays,” “Bitter Feast” … 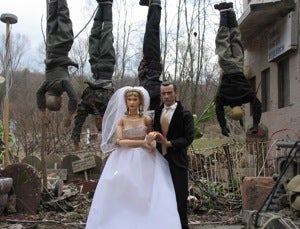 Favorite documentary: “Marwencol" (right).  Jeff Malmberg chronicles an upstate New York man who copes with a brutal beating by creating, and retreating into, a scale model of a World War II Belgian village in his back yard.  It’s a lyrical, smart, tremendously moving portrait of a damaged soul who seems torn between trying to heal and trying to hide.

Runners-up: “Waiting for Superman” (a glossy and tremendously effective big-budget polemic about education from the director of “An Inconvenient Truth”), “The Peddler” (a micro-budgeted charmer about an Argentinian man who travels from village to village making movies in return for room and board).

Docs I wish I’d seen: “Utopia in Four Movements” tops the list, followed by “Cane Toads: The Conquest,” “The Red Chapel,” “Camera, Camera,” “The Tillman Story,” “The Two Escobars” and many more.

Favorite pure-pleasure film: “Ain’t In It For My Health.” Jacob Hatley’s affectionate film about Levon Helm, the greatest singing drummer in rock ‘n’ roll history, isn’t a comprehensive portrait by any means; it doesn’t bear down on Helm’s history, his troubles with the legacy of The Band, or his drug problems.  Instead, it’s a spirited doc that beautifully captures the spirit of Helm’s music: down-to-earth, rootsy, joyous and unpretentious. 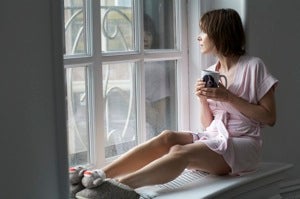 Favorite performances: I think the jury had it right when, instead of choosing a single performance, they singled out the entire ensemble cast of “Hello Lonesome.”  Those actors (Sabrina Lloyd [right], James Urbaniak, Lynn Cohen, Harry Chase, Nate Smith and Kamel Boutrous) were indeed wonderful in that small, touching actors’ movie – but my pick could just as easily go to “The Kids Are All Right” (Julianne Moore, Annette Bening, Mark Ruffalo) or “Welcome to the Rileys” (Melissa Leo, James Gandolfini, Kristen Stewart) or “Four Lions” (Riz Ahmed, Arsher Ali, Nigel Lindsay, Kayvan Novak, Adeel Akhtar).

Best fest guest: I’d probably opt for “Hurt Locker” director Kathryn Bigelow, who came to see the documentary “One Lucky Elephant” – but on this one I’ll defer to FIND’s Dawn Hudson, who was particularly excited about a pair of sportsmen who came to the “Twilight” premiere: New York Yankee Alex Rodriguez, who’d just arrived in town to play Hudson’s beloved L.A. Dodgers, and champion Laker Ron Artest.

Something I probably shouldn’t have tried: Doing the LAFF simultaneously with seeing the entire Ring Cycle at the L.A. Opera.  Seeing 16 hours of Wagner during the exact same time frame as the festival is exhausting (it definitely wasn’t fair to “Disco and Atomic War” to see it at 10 p.m. one night after spending five hours with “Die Walkure” that afternoon), and it limited me to 15 LAFF films when I could have gotten into the mid-20s otherwise.

Still, there’s something kind of cool about the cultural whiplash you can get by going from “Twilight” to “Twlight of the Gods.”

What about the traffic/parking/logistics: Getting there (from Hollywood, not the West Side) was murder on some days, relatively painless on others.  Once I was there, things were easy.  And as long as you don’t try to park a few blocks away on Laker game night (as one L.A. Times reporter inexplicably did), getting out was always a breeze.

Best food: I wanted to find time to walk up Grand Ave. to Gill’s Cuisine of India, or drive up to Phillippe’s, but there were too many movies and too little time.  So I give two thumbs up to Ahn-Joo, the “Korean snack bar” truck parked in the far corner of Festival Village, behind the ticket tent.  Quick and easy and cheap, and the pork mandu hit the spot every time.

Drawbacks: I appreciate that the festival negotiated a reduced rate for parking, but let’s be honest: $8 to park for the movies is not a bargain in most neighborhoods.

Also, it’d be nice if the Regal Cinemas could figure out that putting “LA FILM FESTIVAL” on the message boards above each theater is significantly less helpful than actually changing the boards to tell us the name of the movie.  The volunteers all tried to be helpful, but it’s frustrating to continually have to ask to find out what was playing where.

And maybe this is just T-Mobile’s fault, but why was there virtually no wireless reception in or around the theaters and the Festival Village?

Conclusion: Despite the traffic, despite the Laker madness, despite the other worries and uncertainties of the new location, downtown worked.

Festival workers kept referring to the location as “our new home,” and I see no reason why it shouldn’t be exactly that.