(Warning: This post contains major spoilers for Wednesday’s episode of “The Masked Singer.”)

“The Masked Singer” fans said goodbye to The Panda on Wednesday’s episode of Fox’s kooky celebrity singing competition after the black-and-white bear was eliminated and revealed to the world to be former professional boxer and fitness and wellness expert Laila Ali.

And now that viewers know the late Muhammad Ali’s daughter was the one under that big ole’ panda head, TheWrap can give you the inside scoop, straight from the bear’s mouth.

Let’s start with why Laila decided to compete on Season 2 of the smash-hit contest.

“While I love singing, I’m very, very shy and I also am just not super confident in my voice,” the famed athlete told TheWrap. “But I love a challenge, I love to push myself, challenge myself. So I was like, ‘This will be great, this will be fun.’ It’s exciting and it’s another just look for me, because people know me as a fierce boxer and a fitness and wellness expert. I was like, ‘This will be fun for my fans to finally, when they find out it’s me, to see a different side of myself.’ So all of that together is what enticed me.” 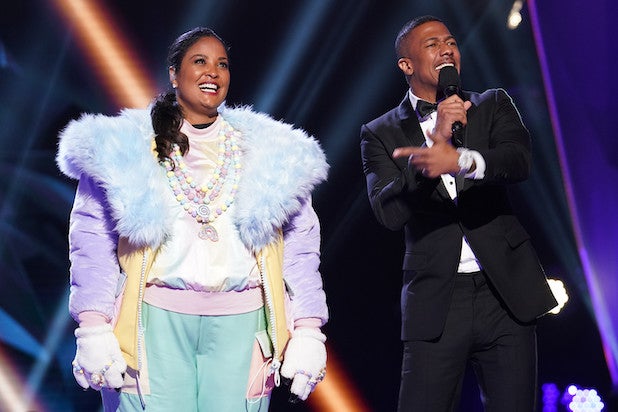 “I chose the Panda because I wanted to be totally anonymous in terms of my body shape and size,” Ali said. “So I didn’t want to wear a bodysuit or anything, because I thought just my physique alone would be a dead giveaway. There’s not that many people that are my height [5’10”] and my size or physically built like me, with a deep voice. And I think that would have been a giveaway with [the ‘Masked Singer’ producers’] package of clues and all that. So that was one thing, I knew I wanted to be covered up and wear the fat suit.”

“And then I like the Panda because I think of pandas as strong and fierce but also kind and sweet. At least that’s how I was gonna come off, anyway (laughs),” Ali continued. “So I wanted to come out and just be really humble on the stage and really shy and I thought I could throw everybody off because I don’t present myself that way, as a shy person or timid.”

On tonight’s episode, Panda faced off against Flamingo first, performing Kelly Clarkson’s “Stronger” and then in a “smackdown” round against Leopard while singing DJ Khaled’s “All I Do Is Win.” But even though she didn’t win, Ali is proud of her song choices.

“[‘Stronger’] was a good song and a challenging song,” Ali says. “My goal was to– I wanted to do female empowerment songs and that was going to be my plan if I stayed on. Sometimes you have to go astray from that if that’s what the producers want, but that what my intention was gonna be.”

While there are a few times “Masked Singer” panelists Jenny McCarthy, Ken Jeong, Robin Thicke and Nicole Scherzinger are right in their guesses during the whosungit game, Ali recalls the most off-base name they threw out while trying to decipher her identity.

“I remember hearing Queen Latifah,” Ali said. “So I said, ‘Oh yeah, they are totally on the wrong track.'”

One of the reasons Ali was able to keep her identity under wraps is because she worked closely with “Masked Singer” costume designer Marina Toybina to customize her Panda costume, but not give too much away.

“I added jewelry, which was not a clue, but just to be cute,” Ali said. “Panda had rings and necklaces and I added a little bit more bling. And I told them to make sure the Panda had a nice booty. I was like, ‘Don’t just give me a fat suit just stuffed in the back looking like a pancake back there. Like shape the booty, give me some curves so that when Panda turns around you’ll see that booty!'”

And the people Ali is most excited to see that booty tonight are her children, who she never told about her participation with the show.

“I told my husband, but kept it from the kids. And I remember my kids saying, ‘Why do you keep singing that song?’ when I was rehearsing at home. And I was like, OK I need to find another way to practice without them hearing me (laughs),” Ali said.

Also Read: 'Masked Singer' Premiere: Ken Jeong Thinks Egg Is a 'Queer Eye' Star - Everyone Else Does Not (Exclusive Video)