With ratings up double digits in every key demo since his channel’s oft-ridiculed name-change to Syfy on July 7, network president Dave Howe told TheWrap he has no desire  to deliver an “in your face” to the many who doubted his brand strategy.

“I’m not going around chest-beating, absolutely not,” he said. “This was the most difficult, risky decision I’ve ever made. I’m just so relieved it’s worked as well as it has.”

The erstwhile Sci Fi Channel had the best five-month stretch in its 17-year history as far as adults 18-34 are concerned, averaging 268,000 in prime time among that demo from July through November, up 19 percent year to year. Over that same period, the NBC Universal-owned channel was also up 13 percent in adults 18-49 and 12 percent in total viewers. 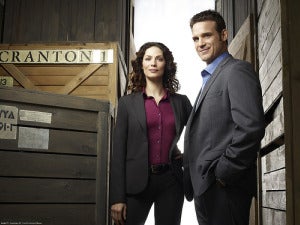 Also, notably, the number of affluent viewers tuning into the channel increased significantly — 21 percent among 18-49-year-olds making $100,000 a year or more.

Driving this ratings success was “Warehouse 13” (pictured at left), which averaged 3.9 million total viewers to rank as this year’s 13th best-performing new cable series, finishing ahead of TNT’s “Leverage” and Lifetime’s “Drop Dead Diva,” series on channels with the kind of mainstream viewer acumen Syfy is striving for.

“I can’t honestly say that because we changed the name we got all these good ratings, but I do think it was a contributing factor,” Howe noted. “It was never a matter of whether we were going to change our name. We had to. We had a brand identity that was too narrow for a multi-platform, nonlinear media world. This is 100 percent uniquely are, and it differentiates us from just being about the future and space aliens.”