“Off To the Races” singer Lana Del Rey is in to the races. And not just the Grammys, which are still a month away.

As events ramp up, Del Rey entered the mix in West Hollywood on Wednesday, palling around with “Big Eyes” lead Amy Adams. Both are nominated for Golden Globes this Sunday for their work on the Tim Burton film.

Del Rey may take the stage on Sunday, for writing the song “Big Eyes” with Daniel Heath, which could win again next week at the Critics Choice Awards. Del Rey also performed the song in the film.

Adams’ nomination comes for depicting the true story of spousal-art-and-identity-theft victim Margaret Keane. The real-life artist described her first viewing of her own story as “traumatic and very emotional” at TheWrap’s special Awards Season Screening on Tuesday night.

The third piece of the equation, favorite villain Christoph Waltz, is expected at Audi’s Golden Globes party on Thursday night, so keep your eyes peeled for the guy who is much more low key in person.

“Off to the Races”: Amy Adams, Harvey Weinstein, and Lana Del Rey on Wednesday. (Todd Williamson/InVision)

The big-name “Big Eyes” daytime scene included a late morning screening of the film before Harvey Weinstein spoke at a lunch before an intimate crowd that included Lawrence Bender and musician Glen Ballard.

Earlier on Wednesday, Del Rey was named a sub-headliner at New York’s Governors Ball, a three day music festival that could be considered an east coast analog to Coachella. (Billboard notes that she will be “one of the most well-attended performances at (that) festival.)

Her set at last year’s  Coachella was a crowd favorite. 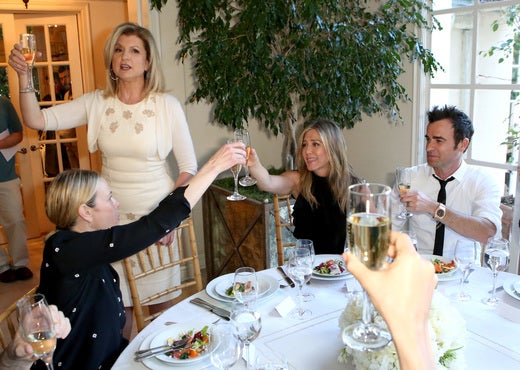 Before that key deadline, IFC Films and a reported list of heavyweight surrogates will celebrate “Boyhood” at the Chateau Marmont on Wednesday night.