Landmark Theatres has named Scott Kleckner, a veteran operations executive who has worked with Disney, the NFL, MLB, NBA and the NHL, as its chief operating officer, according to a report in Deadline.

Kleckner in his role as COO will report to chairman and owner Charles S. Cohen.

“Having spent my career with many of the best companies in a variety of retail, live entertainment, professional sports and hospitality businesses, I’m thrilled to join the Landmark team. As the industry leader in specialized independent exhibition, I look forward to driving the financial growth of the chain and delivering results,” Kleckner said in a statement. 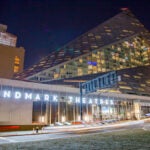 “Scott Kleckner’s transformative leadership skills make him the ideal person for this important role at Landmark Theatres. He has shown tremendous results in all of the many varied endeavors he has undertaken and we look forward to having him on our team,” Cohen added in a statement.