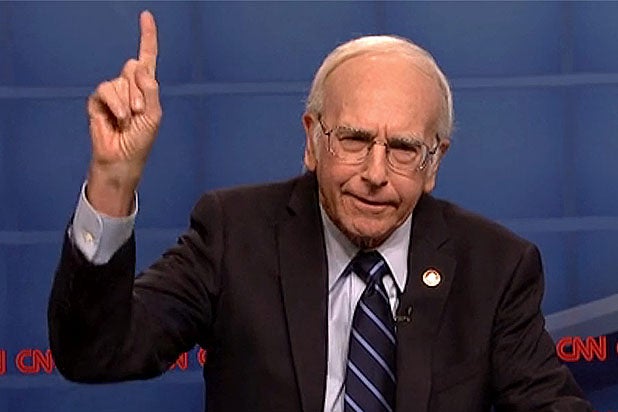 Larry David doing Bernie Sanders is probably the best televised impression of this election cycle, and the “Saturday Night Live” role kind of just cast itself.

“Here’s what happened: In the first debate, I was at the host dinner, a bunch of people from the writing staff were in my office watching the debate,” “Saturday Night Live” executive producer Lorne Michaels told TheWrap. “While I was at dinner, a friend of mine emailed me and said, ‘Bernie Sanders is Larry David.'”

Turns out, it was a thought that evening.

“Then I came back to the office … and I walked in, and Sarah Schneider — who is one of the writers — said, ‘Bernie Sanders is Larry David,'” he continued.

Great minds? As they say on late-night commercials: But wait, there’s more.

“About two minutes later, my phone rang. It was Ari Emmanuel, who is Larry’s agent, and he said, ‘Larry would like to play Bernie Sanders,'” Michaels remembered.

The sketch comedy godfather then called David, and simply informed him that he’d have to be in New York City by that Thursday to make it work. The “Curb Your Enthusiasm” star was on time, and the rest is TV history.

“It was a miracle,” Michaels summed up.