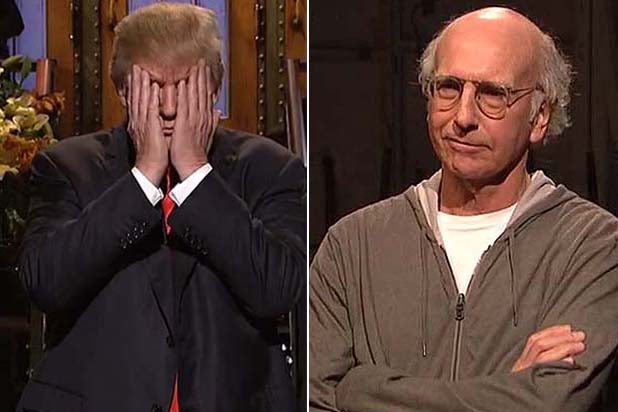 Larry David has not yet collected his $5,000 reward for calling Donald Trump a racist while the GOP candidate was hosting “Saturday Night Live” last weekend.

Deport Racism, the advocacy group that issued the challenge to anyone attending the taping, told CNN they have reached out to the “Curb Your Enthusiam” star’s agent by phone and email, but have yet to get a response.

“I don’t know what we can do beyond that. We’re waiting to hear back. We’re kind of in stand-by mode,” Luke Montgomery, the campaign manager for the group, said.

Although Montgomery is still giving David time to collect, there are two other options: Donate the $5K to Democratic candidate Bernie Sanders or put the “bounty” back up for someone to cash in on by calling Trump a racist at the next GOP debate.

Either way, Deport Racism says it was “delighted” with David, even if Trump and “SNL” was in on the joke.

See Video: Larry David Returns to 'SNL' as Bernie Sanders: 'What the Hell Is This Tonight?'

“Trump’s a racist!” David shouted from the audience during Trump’s opening monologue. When asked by Trump why he was shouting, David answered: “I heard if I did that, they’d give me $5,000.”

“The fact that ‘Saturday Night Live’ was so afraid that somebody in their audience would take up DeportRacism.com forced themselves to have to call Donald Trump a racist in the script,” Montgomery said. “It was the elephant in the room and they had to address it, and that’s a major victory.”

“It actually brought more attention to our message than if a regular protester had done it, as opposed to Larry David,” he added.

Deport Racism has not yet responded to TheWrap’s request for comment.