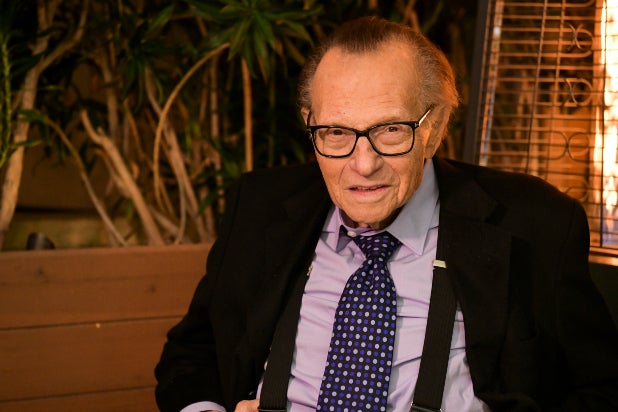 Larry King, who had a legendary six-decade career on TV and radio and pioneered the live interview, died on Saturday at age 87, according to a statement from his Ora Media company.

King, who had a 25-year run hosting CNN’s “Larry King Live,” died at Los Angeles’ Cedars-Sinai Medical Center, where he had been hospitalized last month with COVID-19 and had been treated in the hospital’s intensive care unit. “For 63 years and across the platforms of radio, television and digital media, Larry’s many thousands of interviews, awards, and global acclaim stand as a testament to his unique and lasting talent as a broadcaster,” Ora Media said in a statement.

The suspender-clad broadcaster first rose to fame on radio before CNN hired him in 1985 to host a nightly interview show that won him widespread acclaim, high ratings and two Peabody Awards. At its peak in 1998, the show averaged 1.64 million viewers.

The live show became famous for King’s wide range of interview subjects — from world leaders and newsmakers to Hollywood stars to ordinary people — as well as for King’s natural curiosity and improvisational, nonconfrontational approach. (He famously said he never did research ahead of interviews.)

Despite his low-key style or maybe because of it, King frequently made news on his show, where billionaire Ross Perot announced his independent run for the presidency in 1992. In 1995, King even moderated a sit-down with Israeli Prime Minister Yitzhak Rabin, Palestinian leader Yasser Arafat and Jordan’s King Hussein.

For 20 years until 2001, King also wrote a column for USA Today that reflected his rat-a-tat stream-of-consciousness style, written in a series of non-sequitur observations about politics, sports and pop culture separated only by dot-dot-dot ellipses.

After retiring from CNN in 2010, he founded the Ora Media company with Mexican billionaire Carlos Slim and launched a series of web-based interview shows.

“We mourn the passing of our colleague Larry King,” CNN President Jeff Zucker said in a statement. “The scrappy young man from Brooklyn had a history-making career spanning radio and television. His curiosity about the world propelled his award-winning career in broadcasting, but it was his generosity of spirit that drew the world to him. We are so proud of the 25 years he spent with CNN, where his newsmaker interviews truly put the network on the international stage.”

Prior to his COVID diagnosis, King had survived several heart attacks and surgery for lung cancer in 2017. After undergoing quintuple bypass surgery in 1987, he established the Larry King Cardiac Foundation to provide assistance to patients without insurance.

King is survived by three sons, Larry Jr., Chance and Cannon. King was married eight times to seven different women — which became the fodder for many jokes over the years. He and Shawn King (Southwick) separated in 2019.