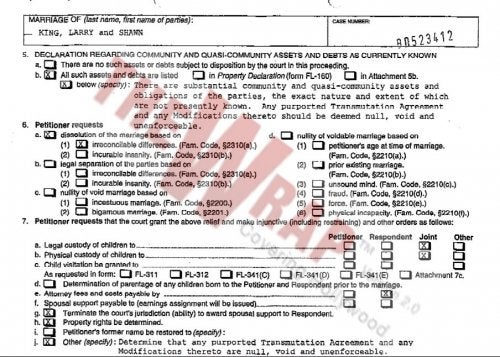 Larry King filed for divorce from wife Shawn Southwick, the eighth failed marriage for the CNN host, according to documents obtained at the L.A. County Superior Court on Wednesday.

In a separate filing, she also filed for divorce from him.

King married Southwick, now 50, in 1997, and has two young boys with her. King is seeking joint custody.

"His major concern is the welfare of his children," King’s publicist Howard Rubenstein told TheWrap. "Beyond that, he won’t be making any public comments."

Southwick is technically King’s seventh wife – he divorced Alene Atkins twice in 1962 and again in 1972.

In June, King will celebrate his 25th year at CNN.