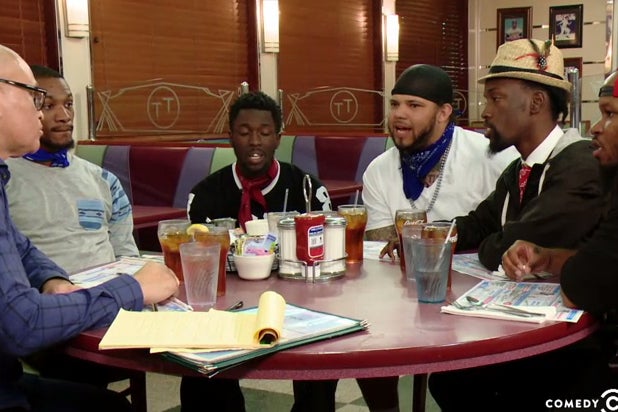 As the gang members spoke about the community’s general unrest and clarified what the mainstream media is referring to as a “truce” between the Crips and the Bloods, the Comedy Central host explained property taxes and offered up that Speaker of the House John Boehner is “an asshole.”

Somehow, the topic came to “Daily Show” host Jon Stewart, and whether or not he was in Charm City during the riots.

“Jon Stewart is not here,” Wilmore said with a smile. “Trust me — he is nowhere to be found in this scenario.”

There was definitely some positivity to come out of the riots, and several of the gang members preached hope, calm and patience when the Freddie Gray verdict comes down.

The most important question came at the end of the segment though, when the “Nightly Show” host got the diner bill and asked, “Are we splitting this six ways?”