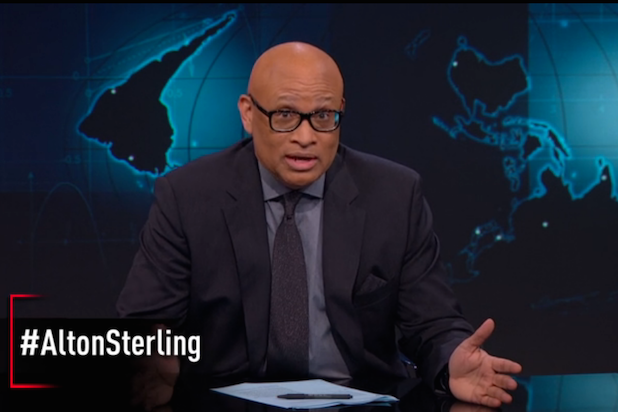 “Thank God for f—ing cellphones,” the comedian said. “Part of what makes people in the black community so enraged about this is for years, we never had evidence for these things.”

A major part of the reason Sterling’s death went viral was because a witness captured video footage of the two white police officers shooting Sterling while he was pinned down. Recent studies have revealed that cops fatally shoot black men at an alarmingly disproportionate rate, a fact the black community has known for a long time.

Wilmore noted that police officers in Baton Rouge are required to wear body cameras — but surprisingly the footage of their cameras didn’t show much. A report revealed that the cameras had fallen off.

“Fell off?! Things don’t just fall off unless you’re talking about Sisqo and the face of the f—ing earth,” said Wilmore.

The comedian went on to express his frustration with the media’s knack for attacking a dead black man’s character. Wilmore showed a montage of reporters commenting on Sterling’s criminal record and arrest history, but explained how ultimately none of that mattered especially so since Martha Stewart’s criminal record didn’t seem to end in her execution.

Wilmore went on to break down the most popular criticism of the Black Lives Matter movement. It’s not that black lives matter more than any other race, he explained, it’s just that “all people don’t have the same uniquely fraught history with law enforcement that black people do.”