Larry Wilmore has one more week hosting “The Nightly Show” left and he is determined to go out on a high note.

The late-night host assured viewers that he is “keeping it 100” on Monday night, following Comedy Central’s announcement earlier in the day that the show was coming to an abrupt end.

Wilmore started out by jovially asking the audience, “So how was your day?”

The answer is probably better than his was after around 100 staff and crew for the “Colbert Report” replacement were given the ax Monday morning.

The supportive crowd for his swan song chanted “Larry, Larry, Larry” and then booed when he announced that it is “the last week of the ‘Nightly Show.'”

After offering the obligatory thanks to Comedy Central for the opportunity, Wilmore claimed he had the “best fans in late-night … even you @Wilmoreblows666.”

Getting serious for a moment, Wilmore said the show was “at its best when the news was at its worst. I am just so proud that we were able to take on real issues and hopefully say something powerful while making people laugh. My only regret is that we won’t be around to cover this truly insane election season.

“But on the plus side, our show going off the air can only mean one thing — racism is solved, we did it,” he quipped, before sharing a photo that “was taken in Ferguson earlier today.” 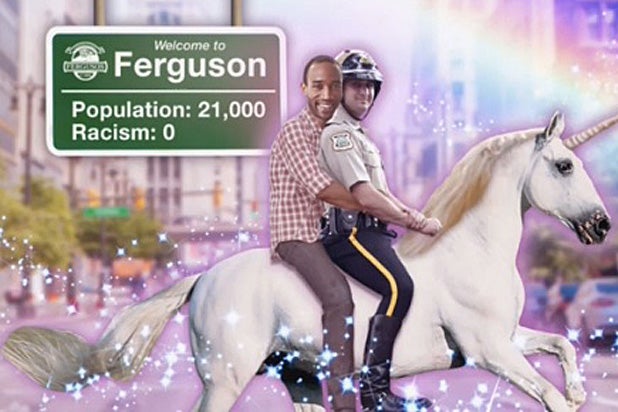 On Aug. 18, “The Nightly Show with Larry Wilmore" will come to an end after 20 months in the Comedy Central timeslot once held by "The Colbert Report." While it never came close to reaching the numbers of its predecessor, Wilmore proved in the series' 259 episodes that he could be as powerful a satirist and commentator as Jon Stewart with his takes on major political and social stories.
View In Gallery
x