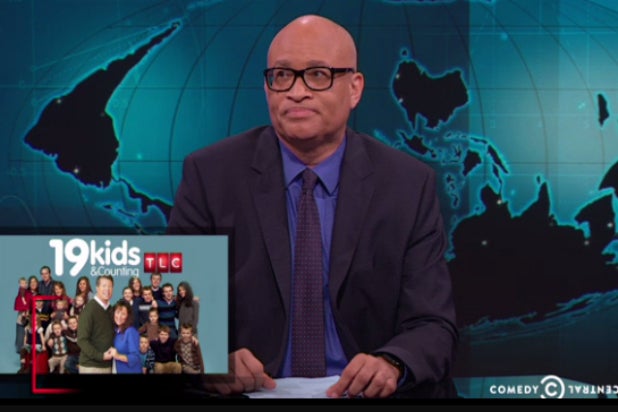 Larry Wilmore took aim at TLC’s Duggar family and the “19 Kids and Counting” molestation scandal, which has been dominating entertainment news headlines over the past week.

News broke last week that Josh Duggar, the eldest son of the expansive reality TV clan, had been accused of sexually molesting five underage girls, some of them his sisters, when he was a teenager.

Duggar issued a statement last Thursday, saying that he had acted “inexcusably” in the past. TLC’s “19 Kids” has since been pulled from the Discovery cable channel’s lineup, but has yet to be canceled. Sponsors have dropped out this week, and the unscripted show was removed from Hulu today.

“I actually kind of feel sorry for the parents,” the Comedy Central host continued last night. “It reminds me of that old children’s story: ‘There was an old woman who lives in a shoe/she had so many children, it was a statistical probability that at least one of them was a creepy sexual pervert.'”

“You think all 31 Baskin Robins flavors are good?” Wilmore went on. “There’s like 17 good flavors, you guys — tops. The rest suck ass. Or, to keep my analogy on point, the rest fondle underage asses.”

“Look, Josh Duggar is the P Bubblegum ice cream of the family,” he concluded.