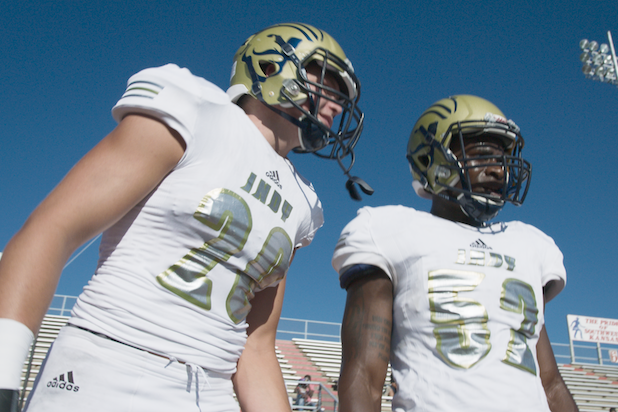 (Spoiler alert: Don’t read this post if you do not want to know what happens on this season of Netflix’s “Last Chance U,” and you know, don’t already know since the actual football season happened like a year ago.)

The Independence Community College (ICC) Pirates, subjects of the most-recent two installments of director Greg Whiteley’s Netflix docuseries “Last Chance U,” had a disastrous 2018-19 season, finishing 2-8 just one year after going 9-2 and winning both their division and the junior college’s first-ever bowl game.

You might think that means Season 4 lacked drama: We — and Greg — can assure you, that’s not the case at all. But yes, there was a lot of losing, which Whiteley and his editors used to their advantage with a particularly cool jump-cut device in Episode 6, creatively skipping over an entire football game to emphasize the season’s oft-renewed hopes and consistent futility.

“One of these things that was both a gift and curse to this last season was the sheer number of games that was exciting. Almost every one of them came down to the wire,” Whiteley said of the edit that took viewers from the Pirates’ Game 4 loss and subsequent vow for redemption directly to the closing whistle of their Game 5 loss. “And in this particular case, almost every one of them was a brand new way of losing in a heartbreaking way. That game that we skipped was no exception — that was an extremely exciting game. But in the original edit that we were laying out, we thought, ‘Boy, this is starting to become a football show.'”

For Whiteley and his general storytelling team, that was never the intention.

“This was supposed to be a moment. This particular game was gonna be the game that they turned it all around. They made some changes — the players really did buy in. And we went into that game thinking they were really going to win this game,” he continued. “And then when it was just one more loss, that became the most entertaining way to edit that game.”

OK, we know what you’re really here for. So ICC no longer has Coach Jason Brown, who resigned after texting a German player that he is the young man’s “new Hitler,” but will the Kansas junior college still have Whiteley and his “Last Chance U” crew, should Netflix renew for Season 5?

“Every year that we’ve done the show — it’s been four now — at the end of the year, when we’re done editing and we submit, and we think there’s a possibility that the show may get renewed, we [say], ‘Well, where do we wanna go?'” Whiteley told us. “In each stop that we’ve made so far, it made sense from a storytelling standpoint to go back for one more year.”

And they’ve been “rewarded for doing so,” he added.

“I don’t know if that means — if we’re lucky enough to keep doing the show — does that mean we are now two years at every [school]?” Whiteley said. “I don’t know, because it’s possible we may go there and it’s a great story but it’s told in one year. I wish I had a better answer for you.”

Season 4 of “Last Chance U” is now available in its entirety on Netflix.