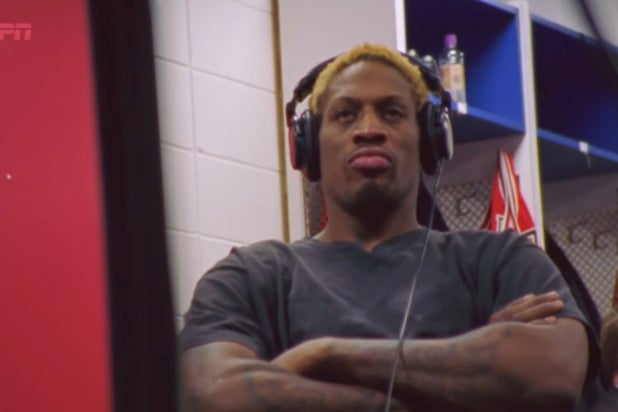 We’ll get to know a lot more about Dennis Rodman, one of the most eccentric personalities of the late-90s Chicago Bulls, when “The Last Dance” returns on Sunday.

Rodman was known as much for his rebounding prowess as he was for his constantly changing hair colors and WWE stunts. “Dennis Rodman, you’ll see next week, didn’t even pick up a basketball until his late teens. His background is staggeringly difficult,” Jason Hehir, the docuseries’ director, told TheWrap.

“You’ll see the kind of personalities that Michael had to manage on and off the court in that locker room.”

Sunday will also feature some of Jordan’s biggest playoff failures (yes, he did have some before he became His Airness), most notably his battles with the “Bad Boy” Detroit Pistons, who won back-to-back titles in the late 1980s. The Pistons were famous for instituting the “Jordan Rules,” which was the codename for their defensive strategy that essentially featured them roughing him up as much as they could (these Pistons were famous for throwing their elbows around).

“You’re going to see the seeds of that championship run were sowed in the Bulls’ inability to overcome the Pistons,” Hehir said. Producer Mike Tollin added that “you’ll see Michael hitting ‘the shot’ against the Cavaliers,”which secured his first playoff series victory.

In the run-up to “The Last Dance” premiere, some speculated that the series is a response to the LeBron James vs Michael Jordan debate. Jordan finally agreed in 2016 to release the footage that camera crews caught during the 1997-98 season (the Bulls allowed a crew to be embedded with them all season on the stipulation that Jordan would have final say on when and how it would be released). That was around the same time that James led the Cleveland Cavaliers to its first championship in franchise history, coming back from a 3-1 series deficit against the 73-win Golden State Warriors, who had just broken the 1995-96 Bulls’ record of 72 wins.

“It’s not a referendum on who is the greatest of all time,” Hehir argues. “I don’t want this thing to be used in a method people use to rank who is better than who.” For the record, he doesn’t believe Jordan finally relented on the footage as a response to LeBron. “Michael might be the least insecure person I’ve ever met,” he said. “It probably has more to do with the fact that he’s got young daughters.”

Also Read: How ESPN and NFL Network Teamed Up to Remotely Broadcast the NFL Draft

The docuseries was moved up from its June start time to April with ESPN and sports fans around the country starving for new sports content. Tollin said that they “had the conversation immediately” following the coronavirus-induced sports shutdown about moving the premiere date. “It was unanimous that we should do whatever we can. The acceleration was only governed by the possibilities production-wise.”

Hehir said they only finished the final edit on the last episode this week. “We knew that episodes 9 and 10 would not be completely done and ready for air until mid-May,” he said. Once they figured out the earliest possible time they could those on the air, they backdated to April for a possible premiere date. “There’s a ton of things that go into the final phase of post-production.”

“The Last Dance” became the most-watched ESPN-branded documentary every, drawing more than 6 million viewers on ESPN and ESPN2 Sunday night, including more than 5 million on ESPN alone.

“The best part is that I’ll get messages from strangers on social media saying that this brought my family together, this allowed me to introduce my kids to Michael Jordan, ” Hehir said. “Someone told me that this was the first time since this shutdown began that his family didn’t speak or think about COVID-19.”