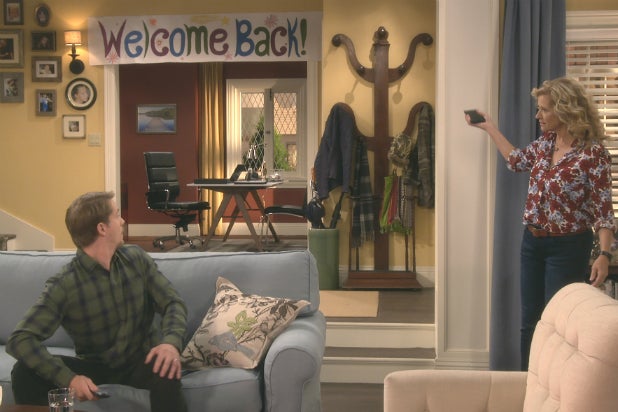 Tim Allen’s “Last Man Standing” returns to broadcast TV on Friday — just not on its original network. However, ABC’s presence will be felt on the Fox sitcom.

Below are the other five mentions.

Baxter Banner
The Baxter household now has a big, colorful “Welcome Back!” banner hanging in the backdrop of the living room. The meta sign was storyline-intended for the return home of character Eve, played by Kaitlyn Dever, who was away at the Air Force Academy. But perhaps it also applies elsewhere.

“What did you think the banner was for, Kyle?” Vanessa Baxter (Nancy Travis) asks her son-in-law, played by Christoph Sanders, during an early back-and-forth.

Also Read: 'Murphy Brown' Revival: Here's Where It Picks Up as CBS Sitcom Returns After 20 Years

Baxter Banter
Before that, there is the actual season-opening conversation. Readers may have caught some of this in teasers.

Kyle, frustrated, on the Baxter family couch: “I’m trying to get the DVR to record my favorite show but it’s not on.”

Vanessa: “Oh. Well maybe it got canceled. You know, the TV business can be a heartless bastard.”

Kyle: “Canceled? Why would they cancel a popular show that everybody loves?”

Mike (entering for the first time): “Just try another channel.”

Vanessa: “Oh Mike. They don’t just take a show off of one network and put it on a different network.”

They all watch Kyle’s show for a beat.

Mike: “Am I wrong or is it like way better on this network?”

Mike, straight-to-camera: “Well, it’s pretty rare, but the show must have a lot of loyal, kickass fans, huh?”

Watch all of that opening-scene stuff here:

Mandy More
Something is different this time about Mandy, who is now played by Molly McCook after a recasting of Molly Ephraim’s role, and on-screen hubby Kyle simply cannot put his finger on it…

Kyle, to Mike: “Just a heads up, Mandy’s pretty mad at me right now. She changed something about herself and I can’t figure out what.”

For his part, Mike assures us he hasn’t changed a bit.

“No matter how long you haven’t seen me, I’m still the same old guy,” Allen said, referencing the show’s hiatus while setting the tone for another politically incorrect season.

Also Read: Tim Allen on Whether His 'Last Man Standing' Character Is Pro-Trump: 'Kind of a Centrist'

Now We See It
Kyle and Mike finally do figure out what’s changed with Mandy — and it only took until the very last line of the episode’s story.

“I’ve got it! You’re taller and blonde!” Kyle suddenly declares out of nowhere.

“I’ll be damned,” Mike says before we cut to his weekly VLOG ending.

We Get It, You Had Decent Ratings and Were Canceled
Speaking of that VLOG, Allen and his writers used their first one on Fox to squeeze in a final shot at ABC.

Many fans believe it was Allen’s right-leaning politics that got “Last Man Standing” canceled in notoriously liberal Hollywood. ABC has denied that.