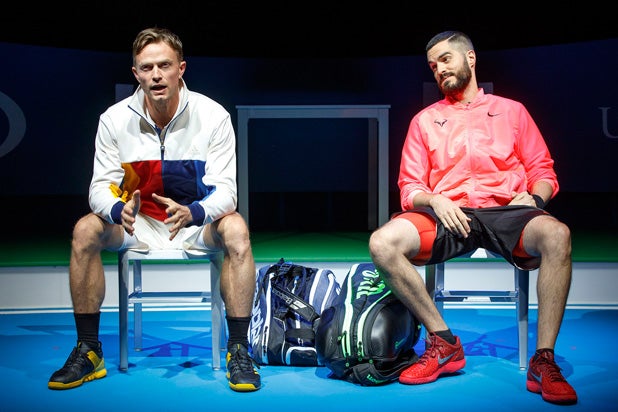 There have been some great plays about sports. “Fences” and “Cat on a Hot Tin Roof” come to mind. When Troy and Brick recall their days playing ball, the talk can be scintillating. The problem arises when playwrights try to bring the sports field directly to the stage.

Since all sports are a form of theater, the replication of that supreme athletics on stage tends not only to dissipate but ring hollow. Both theater and sports require endless practice and rehearsal, but in a play the ending is a preordained; the final score in sports is anything but.

Anna Ziegler attempts to take us inside the minds of two athletes as they battle it out on the tennis court in her new play, “The Last Match,” which opened Tuesday at Roundabout’s Off Broadway Laura Pels Theatre.  Tim (Wilson Bethel) is the champ and aging. Sergei (Alex Mickiewicz) is the challenger and younger, hungrier.

I’m not sure what tennis stars think when they’re in the middle of a match, but it’s undoubtedly not what Tim and Sergei spout as they play air tennis on the Laura Pels stage. The big idea of “The Last Match” is the true happiness is fleeting — that moment when the player is at one with the racquet — and everything else is just insecurity: Will Sergei ever be good enough to beat Tim? How long can Tim remain at the top?

“The Last Match” is that rare play that might be improved if it were a two-hander. Ziegler gives each of her male characters a girlfriend who can each be best described as The Girlfriend. Galina (Natalia Payne) fights nonstop with Sergei. She is also an actress who rarely auditions. Mallory (Zoe Winters) is a former tennis pro who gave up coaching so she could become a mother, after marrying Tim.

Needless to say, both women find themselves playing second fiddle to tennis. You have to wonder: Who did these women thinking they were screwing? An accountant? And since neither woman seems to be working, did they perhaps put up with their respective man’s sports obsession because 1) he’s a star, and 2) his stardom pays the bills?

Bethel manages to give some warmth to a character who’s described as having a “silver spoon” where his “d–k should be,” as if any sports champion, regardless of his natural abilities, hasn’t crammed multiple lifetimes of practice into the few short years he has as a professional. Winters, for her part, manages not to whine in a role that’s one long whine.

Regarding the two Russians, I tried to imagine “The Last Match” if Sergei had been, for example, a poor boy from Oakland who made good. Sergei and Galina are all about their Russian accents, which are delivered at high-decibel levels. Sergei mangles the English language when he’s yelling at Tim on the court. He also mangles it when he’s talking to himself or Galina, even though the theatrical conceit here is that he’d then be speaking Russian.