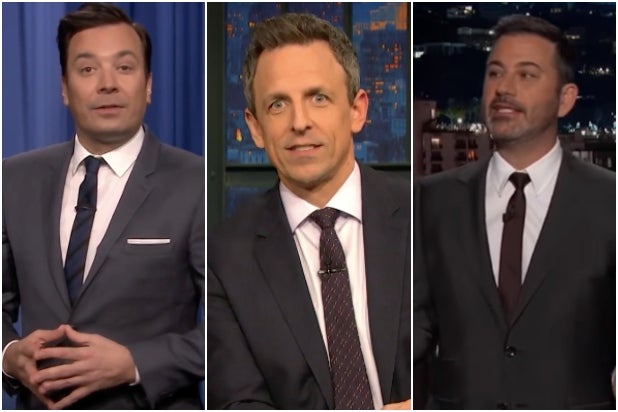 Late-night hosts had their work cut out for them Wednesday after the Senate voted to acquit President Donald Trump on both articles of impeachment.

Jimmy Kimmel, Jimmy Fallon, Seth Meyers and Stephen Colbert all had witty jabs to make at the expense of some of the biggest news moments, from Speaker of the House Nancy Pelosi’s dramatic ripping of Trump’s State of the Union speech to the disastrous Iowa Caucus.

Kimmel gave a monologue for the occasion, where he dropped many a joke at the politicians who voted to keep Trump in power — and at the conservatives who balked over Pelosi’s dramatic ripping.

“This is the most talked-about moment of the day,” Kimmel said. “That hasn’t happened to Trump since his last divorce. And I will say, I didn’t like that. I think tearing up the speech was a bad move. She should have rolled it up and spanked him with it.”

“Minority leader Chuck Schumer said from here on, Trump’s presidency will always have an asterisk next to it,'” Kimmel said. “And Lindsey Graham will always be there to kiss that asterisk.”

He then addressed Romney’s touching speech.

“Romney was actually choking back tears as he explained his decision because he knows the president’s about to order the space force to attack his home state of Utah.”

Then, he aired the clip of Sen. Susan Collins saying on CBS News that she believes “the president has learned from this case.”

Also Read: 'The Daily Show' Reimagines Trump's 2020 State of the Union Speech as a Telenovela (Video)

“You do? Yeah. What he’s learned is, I will do whatever I want, and you will eat it. This is a man who declared bankruptcy six times. Does that sound like someone who learns?”

Watch the rest of Kimmel’s monologue below.

Fallon also weighed in on Trump’s acquittal and the Pelosi moment.

“Of course, the biggest moment of the night was after Trump’s speech when Nancy Pelosi took her copy and ripped one page after another. People were shocked cause when they heard that someone ripped one at the state of the union, everyone thought it would be Trump,” Fallon joked. “So between Pelosi and J-Lo, women over 50 are tearing it up this week.”

On the impeachment results, Fallon quipped, “We knew the results right away, or as Iowa put it, ‘Hey, how’d you do that?'”

“The results weren’t surprising, and they were largely determined by old white men. If you want more of that, tune into the Oscars this Sunday at 8 p.m.,” he said.

Watch the rest of Fallon’s recap below.

Then there was Meyers, who took “A Closer Look” at Romney’s speech, Trump’s acquittal, and the disastrous Iowa Caucus.

“Let’s just say it has not been a banner week for American democracy,” Meyers said. “First, of course, there was the bizarre meltdown at the democratic Iowa caucus where an app designed to count people milling around in high school gymnasiums crashed and delayed the results. The app was built by a company called Shadow, which I assume is run by Christoph Waltz from the Bond films.”

Meyers also likened the State of the Union address to a Trump rally, as republicans began chanting “Four more years.”

Also Read: Fox News' State of the Union Coverage Got Twice as Many Viewers as CNN, MSNBC Combined

“The only difference is Trump is squinting his way through a speech someone else wrote for him, instead of riffing about insane stuff like this,” he said, bringing back a clip of Trump’s famous “sinks, toilets and showers” speech.

Watch more of Meyers’ monologue below.

And, of course, there was Stephen Colbert, with perhaps the last edition of his “Don and the Giant Impeach” segment.

“There it is, it’s official: Nothing means anything. Right is wrong, up is down, Missouri is Kansas,” Colbert said about the acquittal. “Now we know that asking a foreign power to interfere in our election is the new normal. The Democrats have no choice but to do the same thing.”

Then, in what sounded like an impersonation of Vermont Sen. Bernie Sanders, Colbert said “Russia, if you’re listening, I could really use that ‘pee pee tape.’ Milk milk, lemonade, around the corner justice is made.”