For all the drama surrounding late-night TV, you’d think a battle was being waged for a red-hot daypart filled with lots of viewers and massive promises.

While not as challenged as daytime, and not as volatile as primetime, ratings for late night have eroded mightily in the past five years — particularly among the adults 18-49 demo so often cited by networks as key to advertisers. 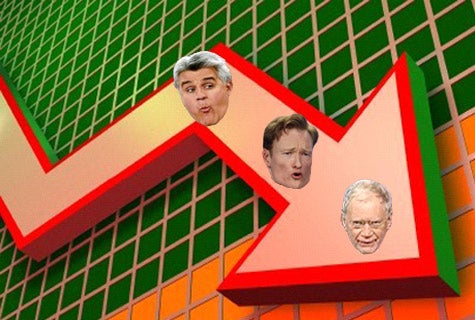 Indeed, despite supposedly weakened competition and the media attention focused on his sextortion scandal, David Letterman’s CBS "Late Show" is actually down 10 percent this season vs. a year ago.

And while there’s no denying that Conan O’Brien’s brief reign as host of "The Tonight Show" has resulted in significant Nielsen declines, Jay Leno’s last five years atop the throne were anything but stable, either. Leno’s young adult audience diminished dramatically over the half-decade.

While ad revenues are down (just as in primetime), "We’ve managed our costs much better," one network chief told TheWrap.

Indeed, the new contract extension CBS negotiated with Letterman last summer is understood to include notably smaller license fee payments from the network to Letterman’s Worldwide Pants production company. So while ratings and revenue may be off, profits haven’t cratered.

And while NBC U chief Jeff Zucker claimed Monday during an interview that the network was now losing money on "Tonight," rivals scoffed at that notion. Not only was O’Brien’s salary lower than Leno’s, O’Brien readily accepted NBC’s requests to have O’Brien shill for various products, both on-air and online.

Moreover, while late-night audiences at CBS and NBC have been declining, the networks still see the shows as flagship broadcasts that differentiate broadcasters from the cable and Internet masses.

Unlike primetime fare, which changes from year to year, late night offers a stability that can help define a network’s image and help it stand out from the increasingly crowded pack. It can also help promote a network’s lineup by having stars from series appear as guests.

"These shows still have a lot of value in them," one senior network executive said.

Just how long that will remain true, however, is a big question.

Like all of network TV, audience fragmentation is making it harder for networks to draw big audiences to non-event series. And with DVRs and online viewing spreading rapidly, viewers no longer have just a couple of original after-hours viewing options.

Indeed, the whole notion of an 11:35 or 12: 35 timeslot for late-night shows may soon seem quaint in a world where a push of a button can easily bring up the latest episode of "CSI" or "Jersey Shore" after a viewer is done watching their late local news.

Here’s a look at how the two big network late-night shows have fared since 2005:

– O’Brien maintained his demo lead over Dave when he took over "Tonight" — at first. During the third quarter of 2009, before "The Jay Leno Show" experiment backfired, Conan’s "Tonight" averaged a 1.1/5 vs. Dave and the "Late Show’s" 0.8/3.

Momentum definitely started slipping away from Conan during the summer, but it wasn’t until the fall that the numbers shrank dramatically. A mix of Letterman’s sextortion scandal and the sharply lower numbers for NBC at 10 p.m. (thanks, Jay!) caused "Tonight" to cede its lead over "Late Show" in the demo.

So far this season, from mid-September through early this month, "Tonight" is down to a 1.0/4 in the demo. It’s tied with "Late Show."

By contrast, "The Jay Leno Show" in primetime has caused NBC’s 10 p.m. Monday-Friday average in the demo to plummet from a 2.2 to a 1.3 — a drop of about 40 percent. Anecdotal evidence suggest NBC’s local newscasts are, on average, down by around 30 percent.