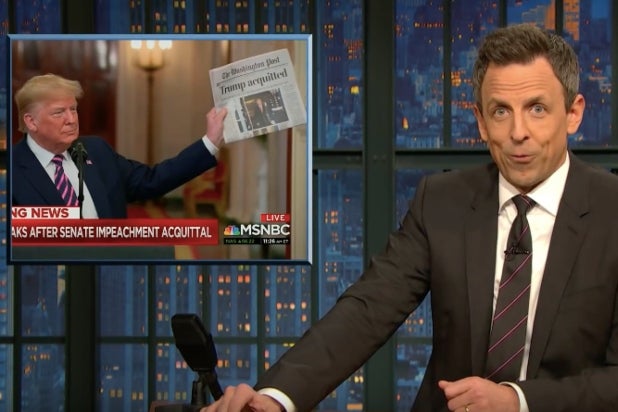 President Trump was in rare form at the National Prayer Breakfast Thursday, and late-night hosts took the opportunity to wax comedic on the freshly-acquitted commander and chief’s newspaper-waving antics.

Seth Meyers, Jimmy Kimmel, Jimmy Fallon and Stephen Colbert all had something to say about the president’s gloating speech at the annual breakfast in Washington.

“Before he even sat down, Trump started holding up the front pages of multiple newspapers showing people he was acquitted. A stunt which he then repeated at a press conference a few hours later at the White House,” Meyers noted.

“He finally found the one job he’s qualified for — newspaper boy. Extra extra, read all about me! “

Kimmel also weighed in, likening Trump’s post-acquittal speech to his own “Pettysburg Address.”

“Donald Trump is the only person who would celebrate almost being thrown out of the White House. He ranted and raved for more than an hour this afternoon, airing every grievance, grinding every ax. It was his Pettysburg Address,” Kimmel joked, referencing Abraham Lincoln’s famous Gettysburg Address of 1863.

“Before his victory speech, Trump spoke at the National Prayer Breakfast, which was a tough decision because on the one hand, he doesn’t like to pray, but on the other hand, he loves breakfast,” Kimmel added. “He used the Prayer Breakfast as an opportunity to lash out at those who oppose him, just as Jesus would have done.”

Watch the rest of Kimmel’s monologue below.

Fallon joked that Trump had to go to the Prayer Breakfast, because, “After being acquitted, God was like, ‘Oh you better be here, dude.'”

The “Tonight Show” host then showed several pictures of Trump looking smug as he held up the newspaper headlines.

“Actually gotta give Trump credit. Even though he was just acquitted, he seemed to have moved past the whole trial and didn’t really want to rub it in Pelosi’s face — okay, never mind,” Fallon said.

“That’s right, at the breakfast, Trump showed off a copy of USA Today with the headline ‘Acquitted.’ Like, ‘I can do anything I want, I even stole this USA Today from a Holiday Inn,'” Fallon said in his best Trump voice.

Also Read: Colbert Has Nothing but Contempt for Republicans Who Acquitted Trump - Especially Susan Collins (Video)

“Trump was having fun until a second later when Nancy Pelosi popped out and ripped the newspaper in half,” he joked. “So remember, this Valentine’s Day, find someone who looks at you the way trump looks at that headline.”

“Before things got started, Trump continued his gloating by holding up a newspaper with the headline, ‘Acquitted.’ This is a historic moment — you remember, like Harry Truman holding up the paper saying, ‘Suck it, Dewey,'” Colbert said.

He also pointed out that Trump’s voice was a little horse and deeper than usual at the Prayer Breakfast, doing an impression of Trump as a demon who begins chanting in Latin when surrounded by so many Christians.

Also Read: 'The Daily Show' Reimagines Trump's 2020 State of the Union Speech as a Telenovela (Video)