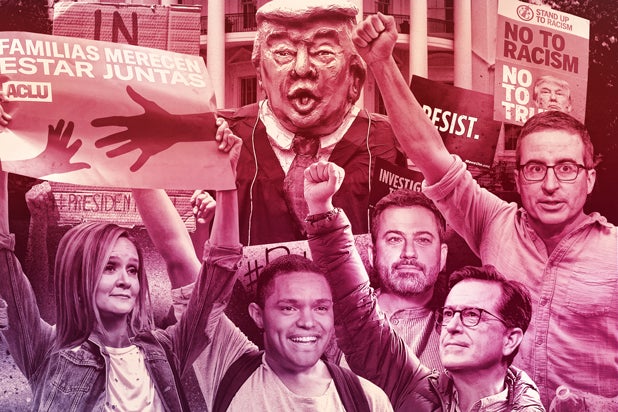 Photo illustration by Gluekit for TheWrap

This story about the late-night resistance first appeared in the Down to the Wire issue of TheWrap’s Emmy magazine.

When Jon Stewart made it onto the Pew Research Center’s list of the five most-admired journalists in America back in 2007 for offering a deliciously smart version of what he himself called “fake news” on “The Daily Show,” he could not have imagined what the next decade would bring.

That phrase, fake news, is now a catch-all epithet hurled with abandon by the President of the United States at reporting he doesn’t like. Meanwhile, Stewart’s successors on late-night television — Stephen Colbert, Samantha Bee, John Oliver, Trevor Noah and now Jimmy Kimmel — provide an essential brand of sharp political humor in a mean, divisive climate desperate for it.

“It’s not like we all communicate with each other on a daily basis,” said Samantha Bee of the late-night focus on Trump. “It just happens that we are topical shows but not news shows, and this is the material we have to work with.

“It all feels very high stakes, so it’s hard to shy away from the real world.”

How dramatically has Trump changed the late-night landscape? “Oh, I don’t know,” said Kimmel, whose show was distinctly less political during the previous administration. “How dramatically did the plague change medieval times?”

He paused. “He fills my head and my monologue and my prescriptions, all at once. He’s omnipresent.”

And the president and his defenders, in turn, have noticed. Trump has called Colbert “a lowlife” and Kimmel “terrible,” and he tweeted this early on a Saturday morning in July: “Late Night host (sic) are dealing with the Democrats for their very “unfunny” & repetitive material, always anti-Trump! Should we get Equal Time?”

(For the record, the FCC’s equal-time rule applies to candidates, not office-holders, and entertainment shows that cover news are exempt.)

Bee, meanwhile, was pilloried in many circles for calling White House advisor and first daughter Ivanka Trump a “feckless c—,” while U.S. Rep. Devin Nunes (R-Calif.) said of a Colbert skit, “This is the danger we have in this country, this is an example of it.”

The hosts, for their parts, wear the disapproval as a badge of honor. Colbert openly rejoiced on his show when he was first bashed by the president, while Bee gleefully showed a clip of NRA spokesperson Dana Loesch bashing “the late-night hosts who think their opinions are the only opinions that matter.”

“If the NRA TV takes a stand against me, I know that I’m taking a correct stance,” she said. “That’s a pretty good barometer of where my point of view should be.”

Political humor on late-night television is nothing new, of course. The “Weekend Update” segment of “Saturday Night Live” has been joking about hot-button political issues for decades, while hosts like Johnny Carson did it good-naturedly even before “SNL” and Bill Maher made it a staple in the early ’90s. But Jon Stewart’s “The Daily Show” launched a new breed of humorists and led directly to the current era of late-night humor.

“It’s a beautiful platform that I inherited from Jon,” said South African comedian Noah, who took over “The Daily Show” when Stewart left in 2015. “He’s left an indelible mark on late-night comedy and satire in general.

“If you look at all the shows that have been spawned — everyone from Colbert and Oliver to Sam Bee and myself — we are all tied to the genius that is Jon Stewart.”

But the platform that Stewart helped create needed a target. That was Trump, a businessman and former reality-show host whose rise to power may have its seeds his humiliation at the hands of late-night host Seth Meyers — with an assist by President Barack Obama — at the 2011 White House Correspondents Dinner.

The things that make Trump Trump — the blustery attitude, the steady stream of untruths, the silly hair — make him prime fodder, as do his policies and his scandals du jour.

“We’re a show that was created specifically to cover the news and politics, and you have to find a way to deal with the deluge that is Donald Trump,” said Noah. “He creates more news than any other single entity in the world, so you have to stem the fire hose and give it some kind of focus.”

British-born “Last Week Tonight” host John Oliver used the same metaphor at July’s Television Critics Association press tour. “He is the gift that keeps on giving the way a fire hose keeps on giving, and you wish it would stop occasionally,” Oliver said, adding that he makes a conscious effort to limit his Trump content to the first 10 minutes of the show rather than the larger pieces that follow. “We try to be wary of him cannibalizing the show.”

Colbert, meanwhile, found his voice and his audience by playing up his antipathy for Trump; his ratings soared after the election as his outrage grew.

“He’s the president of the United States — there’s no escaping him,” said Colbert at the winter TCA tour. “It’s like having oxygen fatigue. That’s why I like doing the comedy. It keeps me from being fatigued.”

But he added, “I love my country more than I love a good joke.”

Bee, whose TBS show “Full Frontal With Samantha Bee” went on the air in early 2016, during the presidential campaign, agrees that the quantity of material isn’t worth the stress.

“I don’t think any of us think it’s tremendously delicious,” she said. “Certainly there’s no shortage of material, but we also are citizens of this country and we want things to go smoothly. I think all of us would make a choice to have a more boring leader, and have to struggle a little bit more to be topical, than to have utter chaos at the highest levels of government.”

Jimmy Kimmel occupies a different ground, less overtly political than Colbert, Noah, Oliver and Bee, all of whom came from the “Daily Show” universe. But because he was initially known as a jokester who didn’t take anything seriously, it hit hard last year when he talked about the heart ailment of his newborn son and used it in a passionate defense of Obamacare that played a part in the failure of an attempted repeal.

In that moment — and frequently since then — Kimmel has been a valuable comic voice of reason, speaking out in a way that hit home for many.

“I don’t know if it was a change in my approach as much as it was a change in people’s perception of me,” he said. “I think it’s easy to create a caricature of someone, and I had certainly contributed to that. But I love my children just as every parent does, and I saw what was happening in that hospital.

“It was at a time when health care was being threatened, and I thought I could make something good come of it.”

And if the increase in political material has alienated some fans who might otherwise enjoy his show, he doesn’t really care. “That train left the station a long time ago,” he said. “Alienation is complete. We are living on two different planets, and one is unrecognizable from the other.”

Even James Corden’s “Late Late Show,” which is the least political of the nominees, begins each show with a short monologue that touches on the news of the day –news that often as not involves President Trump. More extended bits have included a music video set to Shaggy’s “It Wasn’t Me,” with Shaggy as Trump and Corden as Robert Mueller.

“We’ve never once shied away from politics,” said Corden. “We don’t want to do only do that, because there are loads of people who do that and are brilliant at it, and I feel like that is not perhaps where my talents lie. But I don’t think anyone watching our show would ever be in any doubt about where we stand on issues.”

You could say the same about the other late-night nominees, too. “Donald Trump enabled me to take the show into a direction I wanted to take it anyway,” said Noah. “He sparks international incidents on a whim, he opens up ways to get into things we didn’t think we could: trade wars, tariffs, farm subsidies…

“He makes boring things exciting. So I wouldn’t mind the level of material or the quantity of material if it didn’t have such adverse effects on people’s lives. If he was providing benign funny material, that would be great.”

At least one member of the late-night resistance, meanwhile, is looking at the long game and anticipating a very different landscape.

“What’s going on in Washington makes most everything else you might have talked about feel trivial,” said Kimmel. “That’s a tough spot to be in — but make no mistake, we’ll be around long after he’s gone.”

Click here to read more from the Down to the Wire issue of TheWrap’s Emmy magazine.