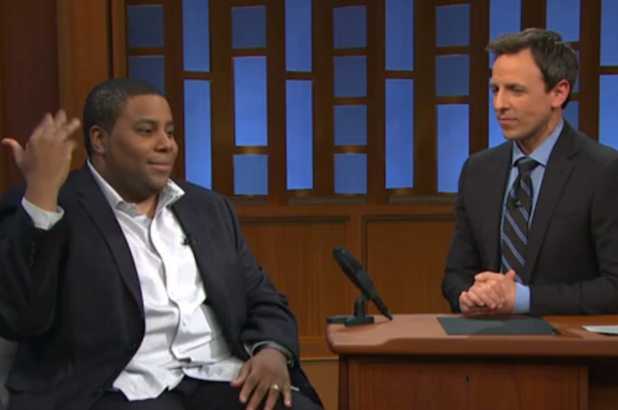 It was a “Saturday Night Live” reunion on Friday’s “Late Night with Seth Meyers,” as Kenan Thompson stopped by to check in on his old cast mates.

It also prompted a trip down memory lane, as Thompson and Meyers remembered past travel nightmares. In one instance, Amtrak canceled their train, forcing the two men to rent a car together in order to get to a comedy show in Rhode Island. Yet, Thompson lacked a credit card and Meyers didn’t have a license. They were saved because the woman at the rental car company was a fan of Thompson’s Nickelodeon show, “All That.”

“They wanted to know where Kel is,” Thompson said, referencing his “All That” co-star.

The drive didn’t go as smoothly.

“I had like night terrors for a week after,” Meyers said. “Where I’d be like ‘Kenan no!’ You drove so fast.”