“The Late Show with Stephen Colbert” brought a little humor to the one-year anniversary of the Jan. 6 attack with biting insults and a catchy show tune.

Stephen Colbert and company opened Thursday night’s installment of the show with an insurrection-themed take on “Seasons of Love” from the musical “Rent.” 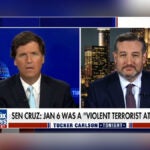 The slickly-produced video included hard-hitting network news reports about the anniversary on the assault, before the footage dipped to black (signaling a change in tone), and the start of the upbeat music.

“525,600 minutes. 365 days since feces were smeared.” A Daily Mail headline then flashed on screen blaring: “MAGA MOB RIOTERS SMEARED THEIR OWN FECES IN U.S. CAPITOL.”

Along with a montage of now-infamous images of the rioters — including the QAnon shaman — the words “infectors,” “defectors” and “douchebags” appeared over the faces of Trump supporters who stormed the Capitol.

After noting that “727 insurrectionists” were arrested, the jingle asked “who else should be jailed” for the attack?

“How about this bum,” the song said as a picture of former President Donald Trump filled the screen.