Stephen Colbert won’t be ripping into anyone else this week in his evening monologue. He’s having to take a break from “The Late Show” on CBS after testing positive for COVID-19.

“Stephen Colbert has tested positive for Covid 19. Tonight’s show is cancelled,” the tweet read. “As previously planned, the show will be airing repeats tomorrow through next week. We will return with new episodes on May 2nd.” 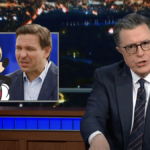 The funnyman responded to his show’s own tweet to note that he is feeling fine. He also confirmed he is both vaxxed and boosted.

“Yep! I tested positive for Covid, but basically I’m feeling fine- grateful to be vaxxed and boosted. Thank you for the well wishes. This just proves that I will do anything to avoid interviewing Jason Bateman,” he wrote.

Jason Bateman was set to be Thursday’s guest. So far, the “Ozark” actor has yet to respond to the “Late Show” hosts humorous dig.