Editors note: The original version of this story, published March 17, should have made clear that the March 18 court date was for a status hearing only. It also implied that the ESOP was considered employees' "chief source" of retirement income; it should have been more clear that the stock fund was intended to supplement existing plans. These changes — and other, more minor edits — are reflected in the version below. 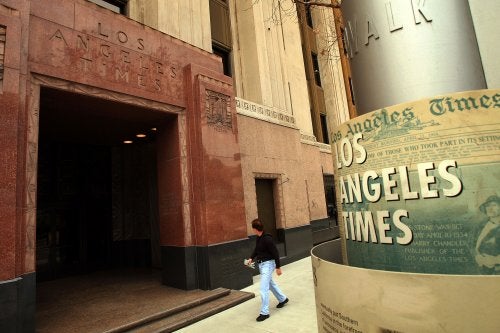 Lawyers representing six L.A. Times current and former writers are facing off against attorneys defending Zell and the executive team who together created an Employee Stock Ownership Plan that allegedly saddled workers with nearly $13 billion in Zell-acquired debt.

Tribune Company — the owner of the Chicago Tribune, the L.A. Times and a constellation of other print and electronic media outlets (and, until recently, the Chicago Cubs baseball team) — was originally included as a defendant but was dismissed.

At the heart of the federal suit lies a stock ownership plan that Zell, a Chicago real-estate tycoon, first proposed in early 2007, prior to his buyout of the company, and which was accepted by Tribune that April.

Turning Tribune into a stock ownership plan-owned entity allowed the company to become an S-Corporation with a hugely reduced tax burden. GreatBanc, an Illinois-headquartered trust company, acted as the plan’s trustee and is now a co-defendant in the suit.

The stock ownership plan was put in place for L.A. Times and other Tribune Co. employees in place of company contributions to their 401(k) plans (to which they could still make their own contributions). But while it technically made employees stockholder-owners of their company, it hardly made them masters of their destiny, the suit alleges; in reality, it says, it made them slaves to a debt generated by Zell and others.

(The Tribune Co. has declined to comment on the lawsuit, while Jenner & Block, the law firm representing the defendants, did not respond to requests for interviews.)

The amended complaint is a dense, 109-page document that delves into the esoteric world of pension-fund law and taxation. It boils down to two charges:

The first is that Zell, along with the GreatBanc Trust Co. and 22 individuals, in moving Tribune from a publicly traded company to a private corporation solely owned by its stock ownership plan, so recklessly leveraged its purchase that it made bankruptcy inevitable and amounted to fiduciary negligence under the Employee Retirement and Income Security Act.

The second charge involves violations of the security acts rules — including one that was broken when the ownership plan purchased unregistered Tribune stock when higher-grade, marketable Tribune stock was available.

The very short version of this financial arabesque says that before its sale to Zell was completed in December 2007, Tribune held a relatively manageable $4.3 billion debt.

Once Zell and company got through buying up millions of allegedly overvalued shares, it had grown into a $13 billion sinkhole that forced the chain into bankruptcy court one year later and the sacking of hundreds of employees – a bloodletting that continues to this day. (Despite the enormous debt incurred during the Tribune buyout, Zell himself invested comparatively little of his own money.)

The lawsuit, which will be tried as a no-jury bench trial, does not seek damages for the six plaintiffs but restitution for the corporation’s roughly 17,000 affected employees, by compelling Zell and his co-defendants to put cash back into the stock ownership plan – replacing worthless Tribune stocks with very real money, although plaintiff attorneys haven’t yet pled specific dollar-and-cent amounts.

“The facts that give rise to both cases are essentially the same,” Feinberg told The Wrap.

On Dec. 17, U.S. District Judge Rebecca Pallmeyer issued a suitably long and thoughtful opinion that denied the plaintiffs’ ancillary claims (Pallmeyer did not agree that Zell could be held liable as a fiduciary), but kept Zell, the chief architect of the scheme, in the proceeding as a defendant.)

Essentially Pallmeyer was saying that Employee Retirement and Income Security Act rules don’t simply govern a retirement plan’s fiduciaries, or managers, but apply to all knowing parties connected to the stock ownership plan.

Although Pallmeyer’s decision to keep Zell as a defendant went unreported by the Chicago Tribune (the L.A. Times gave it a 60-word squib), Feinberg took heart from it, seeing in the ruling a sympathetic judge who was very attentive to the case’s minutiae. Feinberg said Pallmeyer “indicated she is leaning our way.”

The plaintiffs are also asking Pallmeyer to grant the suit class-action status, which would, among other things, allow their lawyers to include all affected Tribune employees in communications about the case.

Jack Barcal, an associate professor at USC’s Marshall School of Business, says that the kind of suit filed by the Times employees is a frequent and common result of stock ownership plans imploding through the over-valuation of their stock portfolios.

“The people who set up ESOPs,” Barcal told The Wrap, “know this and hire consultants at great expense – millions of dollars – to accurately evaluate the stocks” that fund the plans.

Court documents filed by the defense show that Tribune used the Chicago office of Duff & Phelps to evaluate its ESOP, and produced three letters from the firm, dated April 1 and 2, 2007, and Feb. 29, 2008, attesting to the plan’s soundness. (Duff & Phelps is not a defendant in the suit.)

Still, Judge Pallmeyer ruled that even an expert financial opinion backing the ESOP’s viability would not be cause to dismiss the suit against Zell and his colleagues.

Barcal notes that "in 99 percent of the time these cases get settled" without going to trial.

Trial or no trial, the lawsuit has placed Zell and his closest collaborators at the center of a story that could become a fable for an era of financial hubris and ruin.

“Business goes in cycles,” said Feinberg. “There are bubbles, and people and valuations get out of hand. The problem is when you involve in these a pension plan — which is supposed to be governed by a great deal of prudence, care and caution.”