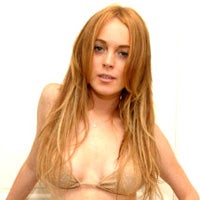 Here’s an update to Lindsay Lohan’s Twitter tantrum and social media meltdown last week aimed at her dad — one with a very old-media twist.

Like most newspapers, the Los Angeles Times has drafts of obituaries in the can in case an old celebrity or politician or notable name croaks.

Most don’t have them for 23-year-olds, but Brittany Murphy and other troubled starlets have, sadly, made having them not so unusual.

When Michael Lohan — currently embroiled in a complicated public feud with his ex-wife and daughters — was reminded on a syndicated radio show that the L.A. Times reportedly has one ready for the suddenly "not bankable" Lindsay, he broke down.

Here’s the transcript, via Mojo in the Morning:

Co-host Shannon: "You constantly say that if someone doesn’t help her she is going to die, and I was reading the other day that, and this is so morbid to think, but the L.A. Times already has your daughter’s obituary written. They just need to fill in a date and a cause of death."

For the non-media-specific portion of the Lohan family feud, check Us magazine’s report.

Lindsay Lohan Reportedly Dropped From ‘The Other Side’