The sophomore installment of the popular American period drama — created, written and executive produced by “Downton Abbey” helmer Julian Fellowes — will feature Benanti as the glamorous widower and Newport resident Susan Blane and Leonard as the jovial Reverend Matthew Forte. 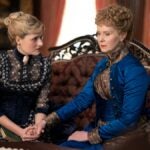 Set in the late 19th century, “The Gilded Age” follows the tumultuous changes taking place during its title era, drawing loose inspiration from real-life events. The series centers on a sheltered young scion, Marian (Louisa Jacobson), who moves in with her New York City-dwelling vieux riche aunts Agnes van Rhijn (Baranski) and Ada Brook (Nixon) following her father’s death. The show traces the aunts’ sociopolitical battle with their neighbors, the Russell family, who are new money, and depicts the often unexplored lives of Black elites at the time, through the eyes of ambitious writer Peggy Scott (Denée Benton).

“As a writer of television, serial drama, you always like to drop a bit of a handkerchief at the end so that they will come back to see how it plays out,” Fellowes previously told TheWrap about the Season 1 finale. “One of the things that interests me about American society, then or now actually, is the way people’s lives can change.”