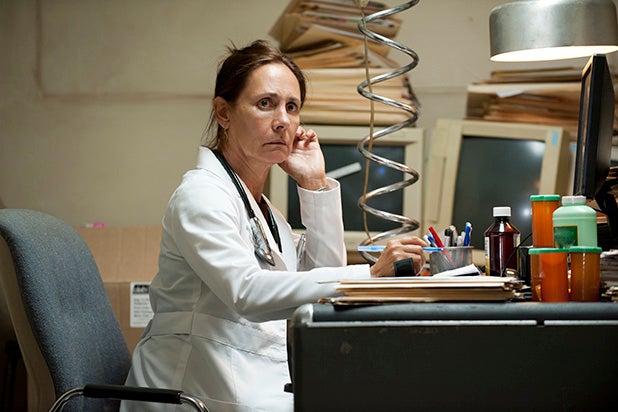 The 2016 Emmy nominations were announced this morning and Laurie Metcalf pulled off an incredible feat: She’s nominated in three different acting categories in the same year.

The veteran actress earned her first ever lead actress nomination for her role as the uptight, overworked director of medicine at an extended care facility for elderly women on HBO’s underrated “Getting On.”

As if that wasn’t impressive enough, she also received two guest actress nominations, one for her role as Jim Parsons‘ mother on “The Big Bang Theory” and one for playing Louis C.K.’s ex-wife on his series “Horace and Pete.” Proving her versatility, those two are in different categories as “Horace and Pete” is a drama and “Big Bang” is a comedy.

Metcalf is no stranger to Emmys love. Prior to this year, she’d been nominated seven times for four different shows. She’s been a regular fixture in the guest actress category, earning nods for “3rd Rock From the Sun,” “Monk” and “Desperate Housewives.”

Between 1992 and 1994, she took home the statue for supporting actress in a comedy three years in a row for her role on the ABC family sitcom “Roseanne.”

Metcalf hasn’t won a statue since 1994, but it looks like there’s a good chance that could change this year.