The 2010 People’s Choice Awards – a show that ostensibly kicks off the Hollywood awards season — were handed out Tuesday at Los Angeles’ Nokia Theater.

The 36th annual show, hosted by Queen Latifah, was broadcast live on CBS.

A record 60 million fan votes decided the winners, according to the show’s producers. 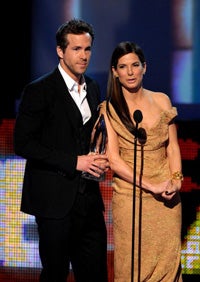 Sandra Bullock picked up two awards – one for favorite comedy movie (“The Proposal”) and another for favorite movie actress.

“Twilight” star Taylor Lautner received a thunderous applause when he won the award for breakout star. The Twilight Saga was evening’s big winner, taking four awards in all.

In another, Ellen Degeneres beat Oprah for Best Talkshow. "Oprah, I love you and I’m sorry to hear about your show got canceled," Degeneres joked.

Ashton Kutcher won the award for best “web celeb” on the strength of his million-plus Twitter followers.

Mariah Carey, accepting the award for best R&B artist, appeared much more sober than she did Tuesday while accepting an award for her work on “Precious” at Palm Springs International Film Festival.

Also notable was the People’s Choice award hardware – updated for 2010 — which made plenty of headlines before the show for its close resemblance to part of the female anatomy.