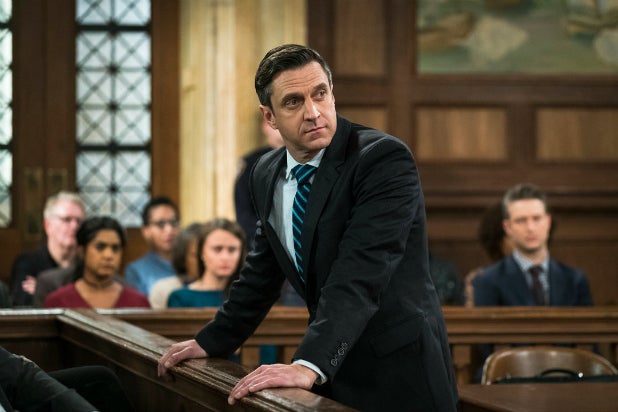 Raul Esparza is coming right back to NBC one month after his exit from “Law & Order: SVU,” with a series regular role in the network’s new drama pilot “Suspicion,” a person with knowledge of production tells TheWrap.

Penned and executive produced by “The Path” creator Jessica Goldberg, the series is a Hitchcockian thriller adapted from a book of the same name by Joseph Finder and directed by Brad Anderson. The story follows Danny Goldman (Derek Luke), who — after accepting a handshake loan from his new friend and millionaire neighbor — gets a visit from the FBI and learns that the decision is one he will regret for the rest of his life. Coerced to work as an informant for the FBI to earn back his freedom, Danny is forced to infiltrate a world of violence and corruption while trying to protect his family.

Esparza will play Tom Canter, the man everyone looks up to. Coming from a humble beginning, he bonds instantly with Danny as the two realize their similar histories.

The news marks a reunion between Goldberg and Esparza, as he recurred on season 3 of “The Path.”

“Suspicion” is executive produced by Goldberg and Finder, along with Keshet’s Rachel Kaplan, Peter Traugott, Avi Nir and Alon Shtruzman. The project hails from Universal TV, where Goldberg has an overall deal.

Esparza held the recurring role of Assistant District Attorney Rafael Barba since season 14 of “SVU.” He was upped to a regular role on the Dick Wolf series in season 15 and just made his exit toward the end of the current 19th season.

He is repped by ICM Partners and Elin Flack Management.