A lawyer for the Black Eyed Peas is accusing the hip-hop supergroup's business manager of failing to file income tax returns for its touring operation going back as far as eight years, and says he is only now getting around to doing their basic accounting. 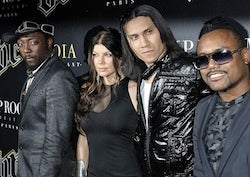 The allegations were filed Monday in Superior Court by the group's attorney, Helen Yu, as a response to a defamation lawsuit filed against her Nov. 30 by the Peas' business manager, Sean Larkin.

Larkin admits that, “due to an inadvertent oversight,” he failed to file income tax returns for the band and some of its individual members. He claims Yu used this lapse to send out letters “filled with venomous lies and fabricated accusations . . . that he engaged in criminal conduct.”

In Yu's reply, she stands by her charges while denying Larkin’s accusations. And, for good measure, Yu claims that for years "Larkin knowingly and/or recklessly breached his fiduciary duties as a business manager by failing to timely make elections to tax various entities affiliated with the music group . . . resulting in losses of no less than $1.1 million to the members of the music group.”

She also says in the court filing that Larkin's failures have put the group at "considerable risk" and caused the Franchise Tax Board to suspend corporate entities owned by the group and its individual members.

The language of the legal salvos is bombastic even by the standards of the entertainment industry.

"Yu hatched a deliberate and illegal plan to ruin Larkin's reputation and poach his clients through a series of deceitful lies," thunders Larkin's original suit.

"Larkin has delayed and obstructed efforts to audit the performance of his duties as a business manager for the music group," counters Yu's reply.

Yu has lawyered up with Century City powerhouse Alan Weil, while Larkin is represented by the equally high-profile Skip Miller, who in the past has represented Bob Dylan and Nick Nolte.

A request made to Larkin for comment late Monday afternoon was not returned.