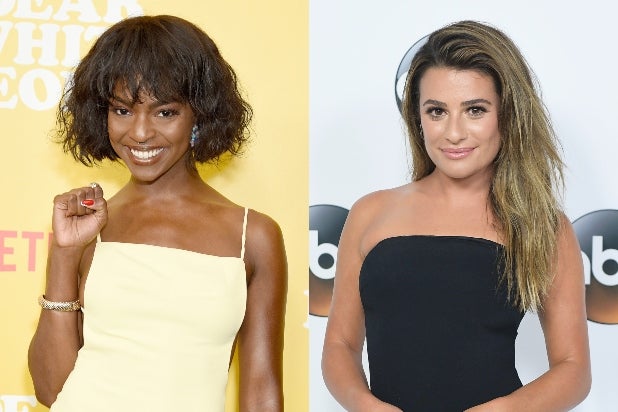 Lea Michele is being accused by former co-stars of mistreatment toward people of color on the set of “Glee.”

After the “Glee” star posted a message in support of George Floyd on Twitter, her former castmate, Samantha Marie Ware, responded with disbelief that Michele could support the Black Lives Matter movement when, to her memory, Michele had made her time on set of the musical series “a living hell.”

Ware played student singer Jane Hayward on the show’s sixth season, during which time she says Michele treated her so poorly that she had to “question a career in Hollywood.” One of those instances, Ware says, involved telling other castmates that if she got the chance, Michele would “s–t in my wig.”

LMAO REMEMBER WHEN YOU MADE MY FIRST TELEVISON GIG A LIVING HELL?!?! CAUSE ILL NEVER FORGET. I BELIEVE YOU TOLD EVERYONE THAT IF TOU HAD THE OPPORTUNITY YOU WOULD “SHIT IN MY WIG!” AMONGST OTHER TRAUMATIC MICROAGRESSIONS THAT MADE ME QUESTION A CAREER IN HOLLYWOOD… https://t.co/RkcaMBmtDA

Ware’s statement was backed up by “Black Lightning” actor Dabier, who appeared in an episode of “Glee” in 2014.

“Girl, you wouldn’t let me sit at the table with the other cast members cause ‘I didn’t belong there,'” he wrote. “F–k you Lea.”

“Glee” star Amber Riley also weighed in, but instead of using words, she used a tasteful gifset of herself pointing her finger and sipping the tea.

Another former castmember, “Zoey’s Extraordinary Playlist” star Alex Newell, also responded with a gif of Coco Montrese from “RuPaul’s Drag Race” saying “Get her Jade!” Newell joined the cast of “Glee” as singer Unique Adams during the show’s third season.

“Lea treated me as so subhuman that I left the set of ‘Glee,'” she wrote.

Representatives for Michele have not respond to TheWrap’s request for comment.

Later on Tuesday, Michele was dropped from her partnership with recipe-kit delivery service HelloFresh after users requested that the company cut ties with the actress.

“@HelloFresh should probably cut ties with @LeaMichele …it’s only a matter of time before people stop buying your products bc you support her #hellofresh #LeaMicheleIsOverParty,” one user wrote.

HelloFresh responded: “HelloFresh does not condone racism nor discrimination of any kind. We are disheartened and disappointed to learn of the recent claims concerning Lea Michele. We take this very seriously, and have ended our partnership with Lea Michele, effective immediately.”

GIRL YOU WOULDNT LET ME SIT AT THE TABLE WITH THE OTHER CAST MEMBERS CAUSE “I DIDNT BELONG THERE” FUCK YOU LEA https://t.co/s4NoLdtqRs

10 Actors Over 90 Still Making a Mark in Hollywood, From Mel Brooks to Betty White (Photos)

Some stars show no signs of slowing down

These actors are 90+ and show no signs of slowing down.