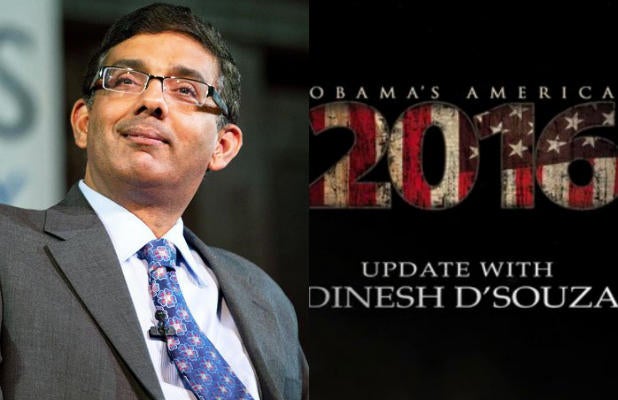 I am a storyteller by trade. I’ve told stories about nations at war, out-of-control dinosaurs and governments persecuting their own people. My job as a filmmaker is to tell these stories in the hope that we can avoid having to relearn many of the painful lessons that humanity has lived through.

The American experience is a completely unique one in the annals of history. Our nation was founded by individuals who were deeply skeptical of the power of government and spoke freely about the great dangers that lay ahead for the nation they were founding and the importance of the governed to always maintain control over those who would seek to govern them.

At least part of that skepticism came from the experience of rebelling against a powerful despot named King George III.

So its easy to see why artists like me are gravely concerned when I see fellow filmmaker Dinesh D’Souza, whom I have worked with and greatly admire, be arrested by the very government whose leader he had the temerity to forcefully speak out against in the middle of the American public square during an election year.

Let us save the arguments about arcane campaign finance laws and appropriate civil sanctions for those who are accused of breaking them, for another day.

The topic of this day is the special role that artists have in our society as secular priests, those charged with creating art that disturbs, challenges, convicts, enrages and inspires. It also often falls on the artists to challenge our leaders through their work.

Corresponding to that special role that artists have in our culture is the equally special responsibility that leaders have to treat artists with respect and deference — to go the extra mile to ensure that they feel secure in the knowledge they will in no manner be bullied or silenced, forced to violate their consciences or made to feel that they must withhold honest criticism of those who rule over them.

In his book “3 Felonies A Day,” author Harvey Silverglate lays out his thesis that the average American commits three serious crimes per day, which means that in theory every American citizen could be arrested and thrown into jail without technically infringing upon the rights that we hold dear.

But that’s not the way we operate as Americans. We are a nation of laws, but those laws are also held in tension with other equally important virtues: common sense, proportionality, a sense of justice and a deep respect for those who dissent, as a nation birthed from dissent.

“2016: Obama’s America” is an admittedly hard-hitting film, but its also a fair one — one in which the President is heard extensively in his own words, not edited or out of context. But whatever you may think of D’Souza’s movie is not the point here, but rather that, given the nature of his high profile work in establishing himself as the President’s most prominent critic in pop culture, President Obama should have taken special care to see that D’Souza not be prosecuted frivolously or given the kind of extra scrutiny that would cause his accusers to immediately suspect foul play. Of course nobody, not even the President’s chief accusers are above the law, but a healthy democracy cannot flourish in a climate in which political dissidents are prosecuted for what is the modern day equivalent of jaywalking, especially in a case where no malicious intent or attempt to gain favor or something of monetary value is present.

“You do not become a dissident just because you decide one day to take up this most unusual career,” noted the great Czech playwright who went on to rule his nation after years of suffering at the hands of ruthless dictators, Vaclev Havel. “You are thrown into it by your personal sense of responsibility, combined with a complex set of external circumstances. You are cast out of the existing structures and placed in a position of conflict with them. It begins as an attempt to do your work well, and ends with being branded an enemy of society.”

Dinesh D’Souza followed his conscience which led him to write a book and make a movie deeply critical of the most powerful political figure in the world. But that power is illusory and temporary, and above all else, is granted by the people he governs who can take it back at any moment if they see it being abused.

I believe that what has happened to my colleague, friend and fellow American is a grave injustice for all and a special affront to the artistic community-which must have the freedom to speak, write, sing and paint freely without a trace of fear of governmental retribution. And as creative person myself, I feel compelled to point out this grave scar on our nation that this prosecution reveals.