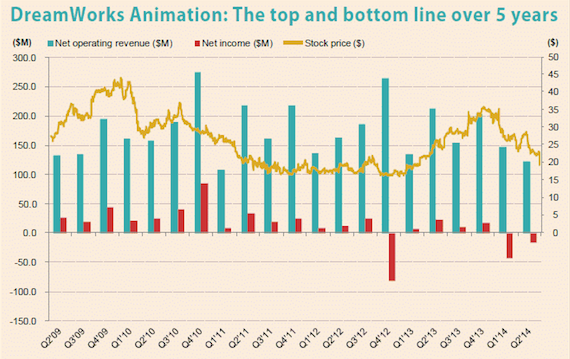 While Jeffrey Katzenberg may have found a willing buyer for DreamWorks Animation in the Japanese conglomerate SoftBank, one leading Wall Street analyst said Sunday that the reported $3.4 billion price tag is “bad business.”

“Wanting to be in Hollywood is nothing new for overseas investors,” Rich Greenfield, analyst with BTIG research, told TheWrap on Sunday. “The question is why buy a studio with such limited output?”

“SoftBank will learn the hard way how bad a business Hollywood is when you overpay,” he added.

Not everyone agreed with Greenfield. Update: Eric Wold, an analyst with B. Riley, told TheWrap that “Given the surge in the box office industry within China in recent years, I believe that it only makes sense for well-capitalized companies to look to expand and gain access to content in the world’s largest box office market.”

Wold noted that DreamWorks’ library of animated content will resonate in China and could be monetized through avenues such as theme parks.

A knowledgeable Hollywood insider said he thought the play made sense: “Awesomeness, which Jeffrey bought, is the future of content, especially on YouTube and the Internet. Jeffrey’s family product, plus AwesomenessTV, and having Sprint could be the content play of the future.”

SoftBank hit a home run last week with the massive IPO of Alibaba, of which it owns more than 30 percent. Last year, SoftBank bought Sprint for $21.6 billion, so the cash-rich conglomerate is clearly looking for content, and DreamWorks makes high-quality, family-oriented programming that qualifies.

Just not that much of it.

CEO Jeffrey Katzenberg has been intensely focused on finding new growth opportunities in television, China and has invested in digital with the purchase of Awesomeness TV, a teen-oriented network on YouTube run by the dynamic Brian Robbins.

SoftBank is reportedly willing to pay $3.4 billion for a company currently valued at $1.9 billion on the public market. DreamWorks Animation closed at $22 a share on Friday.

The size of the premium is what doesn’t make sense to Greenfield. “Why pay a 50 percent premium? he asked.

DreamWorks’ current business is largely still in film, and there is little doubt that developing these other revenue streams will take time.

After the release of “How to Train Your Dragon 2,” an SNL Kagan report in August wrote: However one looks at “Dragon 2,” DreamWorks Animation is still in a tough spot in that its overall financial health is still very much dependent on the performance of its feature films.

FBR & Co. analyst Barton Crockett, who recently launched coverage of DreamWorks Animation with a $24 price target, noted in a July 28 research report that “Dragon 2” was on track for a 19 percent decline in domestic box office compared to the first “How To Train Your Dragon” despite both limited competition and positive reviews.

The movie ultimately made $610 million worldwide.

“It’s tricky for them right now because they are still dependent on just a couple of films a year,” SNL Kagan’s Wade Holden said in an August report, noting that the studio only releases two or at most three titles annually. In 2014, in addition to “Peabody & Sherman” and “Dragon 2,” DreamWorks Animation will release “Penguins of Madagascar” in November.

“They have been making moves to change that with all of the TV programming that they’ve got now,” Holden said. “Moving into TV programming is hopefully going to stabilize their revenues going forward, but I think it’s going to take some time for that to happen.”

B. Riley & Co. analyst Eric Wold is similarly looking to the TV segment to be an important driver for the company going forward.

“Given weaker-than-expected results with a number of theatrical releases over the past two years, we believe the TV segment is becoming an increasingly important driver [for] stability in results, visibility into revenues and overall contribution margins,” he said in a July 30 research report. “With the delivery of 3 new series in 2H14 and then another 7 new series in 2015, management still expects revenues from the TV segment to ramp to $250MM in 2015.”