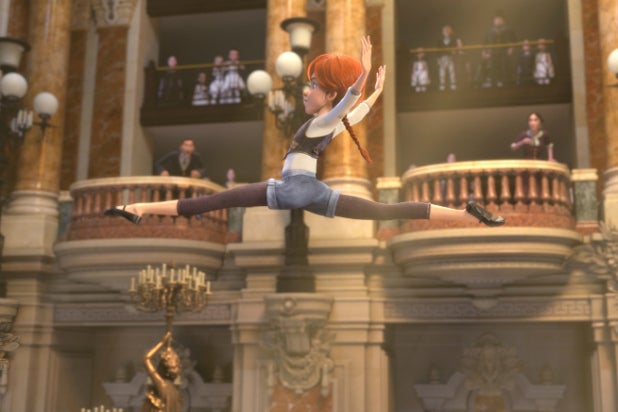 An orphan girl’s dream of becoming a top ballerina in Paris hardly sounds like the stuff of big-time animated fare, not unless the “girl” were a talking ferret or goat or wombat or whatever, followed around by a smart-ass insect.

But the French family flick “Leap!” is content to believe in computer-rendered humans to care about, a picturesquely painted 19th century City of Lights to be transported to, and a story of pluck, talent, hard work and adventure that you’ll always be ahead of, but never entirely mind seeing play out. Especially if you’ve got a wide-eyed youngster in tow, or never quite got over the undiscovered performing genius you always knew was inside you.

Called “Ballerina” in its European run — where a girl-specific title and lack of emphatic punctuation clearly aren’t turn-offs to family audiences — this modestly budgeted but appealingly energetic piece of aspirational fluff is best when its modern sensibilities mesh with its old-fashioned themes, and jarringly off whenever it feels the need to kowtow to contemporary kidpic tropes like slang, fart jokes, and anachronistic references.

A vigorous, pop-scored “dance off” between the underdog heroine and her snooty rival? In our “Pitch Perfect”/hip-hop battle era, why not. But dialogue that has our twirling, jumping protagonist’s boy pal jokingly call what she’s doing “kung fu”? That’s not pop culture winking, it’s lazy wisecracking.

“Leap!” does start with a certain uphill battle of sympathies, trying to convince us the sun-kissed, massive, bell-towered, country orphanage on the coast of Brittany is a place from which anybody would want to escape. (Couldn’t the artists have tried to make it seem a tad horrifically Dickensian, instead of ripe for a Gallic getaway?) No matter: ebullient Félicie (voiced by Elle Fanning), always kicking up her heels, wants out so she can fulfill her dream of dancing for the Ballet de Paris, so we want that for her, too.

With the help of her raggedy best pal Victor (Nat Wolff), a budding inventor working on human wings, the pair escape the clutches of the orphanage’s rotund, overprotective guardian Luteau (Mel Brooks) and make it to cobblestoned, lamplit Paris, where the Eiffel Tower is still under construction, and where Félicie is ready to start building her own destiny.

Until Félicie swipes Camille’s acceptance letter, that is, pretends to be her, and joins the prestigious and competitive Opera Ballet School. Eventually she works her way into contention for the role of Clara in an upcoming production of “The Nutcracker,” thanks to rigorous off-site training with Odette, a one-time star ballerina sidelined by traumatic injury, who sees promise in her untrained, exuberant charge.

It’s patently unfair to compare animated froth like “Leap!” to any classic of dance cinema like “The Red Shoes,” especially when the “Leap!” dance sequences, though spirited, clumsily mix motion-capture choreography with the kinds of physics-defying feats we expect from animation. Yet it’s worth noting that the most entertaining and sensitively handled parts of “Leap!” are in the more human-sized feelings of nurtured passion and artistic bonding that any good tale of the fleet of foot requires.

No matter how much directors Eric Warin and Eric Summer (who wrote the story with Laurent Zeitoun) try to distract with dumb comedy — usually involving the annoying Victor — or cartoony action (there’s a typically overwrought climax on the unfinished, yet-to-be-gifted-to-the-U.S. Statue of Liberty), the relationship between Félicie and Odette is a warm, heart-tugging one, whether focused on the intricacies of dance mentorship or augmented by pop songs and inspirational platitudes.

And Jepsen fans, don’t fear: the Canadian singer’s howitzer of bubblegum “Cut to the Feeling” gets its just due in the big dance finale — and if you feel the need to complain about technopop scoring an 1880s-set ballet, you aren’t the audience for “Leap!” (Also, you’re heartless.)

A final note about the disingenuous, cynical poster for “Leap!”, which stresses Victor in his winged contraption holding Félicie above Paris, as if humans flying were the movie’s construct, and our heroine needed male help: Most of the international posters for “Ballerina” spotlight Félicie in dance garb, because, well, it’s about ballet. Was the Weinstein Company afraid to alienate brothers tagging along with sisters on a family trip to the movies?

Sometimes, you just wish the people who make these decisions would take a flying …