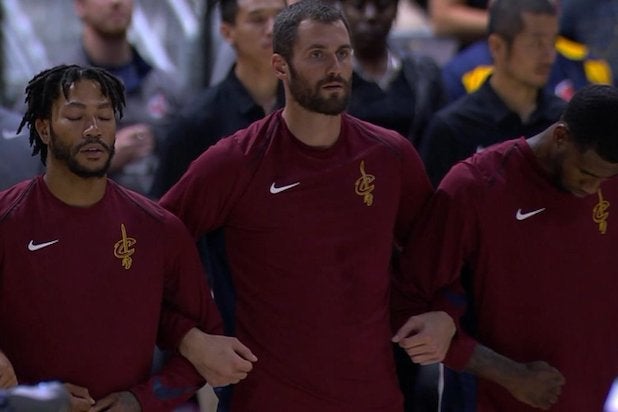 Prior to the start of their season opening game against the Boston Celtics, LeBron James and the Cleveland Cavaliers locked arms in protest during the singing of the national anthem.

The protests come after Donald Trump criticized athletes who kneel during the anthem, while Cavaliers star James called Trump a “bum” on Twitter after he rescinded the invitation to the Golden State Warriors to visit the White House.

Also Read: Bill O'Reilly Wants You to Know His Dog 'Would Never Take a Knee' During National Anthem

When asked about whether he thinks NBA players should protest, TNT analyst Kenny Smith said he feels athletes should use their voice to speak out on social issues if they want. But fellow analysts Charles Barkley and Shaquille O’Neal would rather see the protests that have already occurred be followed with action.

“Enough talking. When are we going to do something about it?” O’Neal said. “When you allow people to deviate from what you’re trying to do, then they can create other problems. They always say, ‘We’re not disrespecting the flag,’ but when you allow people to say, ‘You are disrespecting the flag by doing it during the national anthem,’ is the message really being heard?”

See the video on their conversation below.