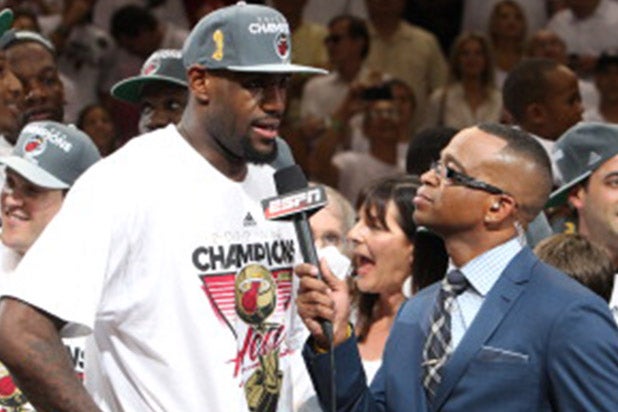 Stuart Scott, the ESPN anchor known for his quick-witted catch phrases “Boo-Yah!” and “as cool as the other side of the pillow,” is being remembered by giants of the sports and media worlds.

Scott died Sunday at age 49 after a long battle with cancer, the network said in a statement.

As news of his death spread, Scott’s fellow broadcasters and the athletes that he spent years covering, paid tribute to the “SportsCenter” co-host on social media.

“Can’t believe you’re gone from us!” NBA All-Star wrote on his Instagram page. “Thank you so much for being u and giving us inner city kids someone we could relate to that wasn’t a player but was close enough to them.”

“I will miss Stuart Scott. Twenty years ago, Stu helped usher in a new way to talk about our favorite teams and the day’s best plays,” the President said in a statement tweeted by The White House. “For much of those twenty years, public service and campaigns have kept me from my family – but wherever I went, I could flip on the TV and Stu and his colleagues on SportsCenter were there. Over the years, he entertained us, and in the end, he inspired us – with courage and love. Michelle and I offer our thoughts and prayers to his family, friends, and colleagues.”

Below are their tweets.

Can't believe you're gone from us! I am deeply saddened because not only will not be replaced as a… http://t.co/2MMLgFR6lf

Stuart wasn't covering heroes & champions, it was the other way around. Thinking of my friend & his daughters.

I can't believe he is gone. There was nobody like Stuart Scott, There will never be again. A big presence with even a bigger heart. RIP SS.

Beyond being a great broadcaster, Stuart was a better father, a better person, a better man. Devastating loss for us all. Love you bro.#RIP!

"Stu helped usher in a new way to talk about our favorite teams and the day’s best plays." —Obama #RIPStuartScott pic.twitter.com/DGLEf76xFu

Mornings like this remind me of how short life can be. Carpe diem and love like there is no tomorrow. Stuart Scott, you will me missed.

Stuart Scott was a great man and always so kind. An inspiration to so many, taken from us far too soon. Rest in Peace Stuart.

Stu Scott's passing hit me like a ton of bricks. Rest in PEace bro you pioneered that coolest side of that sportscasting pillow. #StuSalute

He was as cool as the other side of the pillow & will be missed. Prayers up @StuartScott & family #RIPStuartScott pic.twitter.com/HXuf7qcbMy

We are heartbroken to report that Stuart Scott has died after a long fight with cancer. He was 49. pic.twitter.com/aI0TGwFqGU