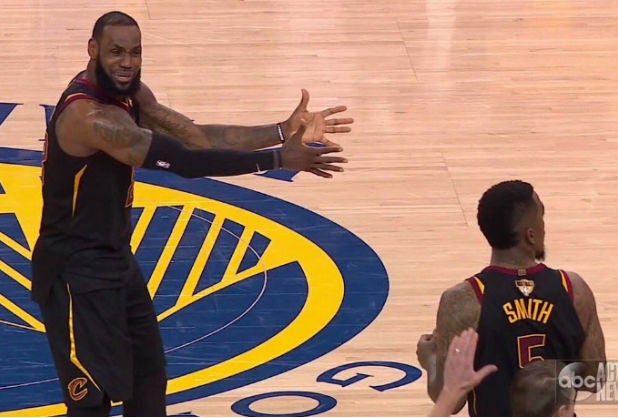 Disappointed Cleveland Cavaliers fans are consoling themselves Thursday night with a hilarious series of memes mocking the infuriating moment Cleveland’s hopes of winning were dashed, and LeBron James realized it.

The first game of the 2018 NBA finals was tight, with the Cavs and the Golden State Warriors battling right up to the end of regulation. That was until Cavs shooting guard J.R. Smith made a gaffe that will live on in Finals folklore.

With the score tied following a missed George Hill free throw with five seconds left in the game, Smith rebounded the missed free throw and apparently forgot that the game was tied. Instead of attempting to shoot, or call a timeout, Smith held the ball in what appeared to be an attempt to run out the clock. This put the game into overtime, during which Golden State romped to a 10-point victory. You can watch the debacle in the tweet below.

It’s an excruciating moment that was best encapsulated by LeBron’s reaction immediately after, which you can see at the top of the post. James scored an amazing 51 points during the game, and clearly, losing because of a teammate’s brain fart pissed him the hell off.

So yeah, it sucks if you’re a Cleveland fan and it even sucks if you just appreciate what LeBron must be feeling. Enter the internet, which pretty much had LeBron’s back.

Some just had sympathy:

LeBron to JR Smith: “TAKE THE BALL AND PUT IT IN THE HOOP” #NBAFinals pic.twitter.com/bVCA5g3epp

LeBron's look says it all pic.twitter.com/oZjDyq3kZ9

"I went for 51-8-8 and you gonna do that to me?" – LeBron probably #NBAFinals pic.twitter.com/3LYqX7LNWe

TFW you have 5 gold medals but your team doesn't help you at all pic.twitter.com/JHj42snBUF

Or perhaps LeBron’s future — no one will be mad if he leaves Cleveland a second time:

When LeBron leaves Cleveland 4 games from now…… we aren't even going to need an explanation. Just remember this picture pic.twitter.com/IHA02w7I6D

Come back to this Tweet in early July when Lebron is on the Rockets
This made the decision for him
I have never seen anything like that
J.R just ruined any chance this series had at being good
goodnight ???????????? pic.twitter.com/bFPYC4KpDt

This will be the Lakers pitch to LeBron on July 1. pic.twitter.com/Z1rOC3COGn

“which way is houston, lebron?” pic.twitter.com/tN0h9zUl35

Others saw the metaphorical implications:

Some even imagined the scene as a heartstrings-tugging domestic drama.

lebron lookin like a mom sick and tired of telling you to keep those shoes off her rug so help me god pic.twitter.com/0LOoZZGXoL

LeBron "What I tell you about drinking Henny before games JR" pic.twitter.com/jC6mSbQ0Tp

Of course, it wouldn’t be 2018 without a Thanos reference:

JR: *Holds onto ball instead of attempting game-winning shot*

On the bright side, LeBron is still amazing.

And it took the Warriors OT to win pic.twitter.com/SGxMEAt7Be