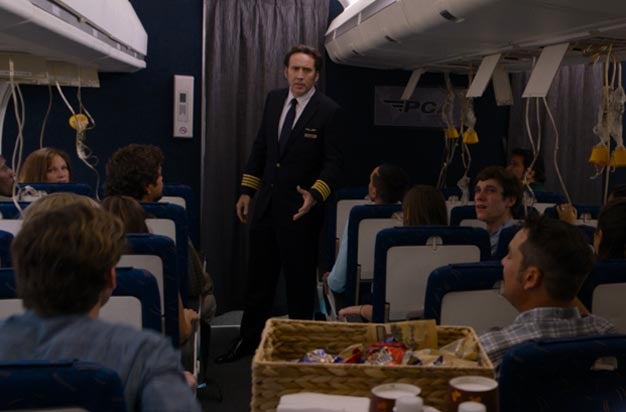 “Left Behind,” a Rapture disaster movie opening Friday, has all the subtlety of a sledgehammer and production values that verge on parody. Intended for a broad audience, it’s best appreciated by the most ardently faithful.

Where HBO’s post-departure series “The Leftovers” is moody and enigmatic, “Left Behind” is heavy-handed and overt. There is no mistaking the Christian messaging behind this remake of 2000’s direct-to-DVD movie starring Kirk Cameron, based on Tim LaHaye and Jerry B. Jenkins’ bestselling series: Biblical scriptures abound; characters warn about the need to be ready for the apocalypse.

“God knows everything,” a persistent traveler tells journalist Buck Williams, played by Chad Michael Murray in this outing, and passerby Chloe (Cassi Thomson), as the action gets underway.

See video: Nicolas Cage Is ‘Left Behind’ to Try and Not Crash a Plane in Latest Post-Apocalyptic Trailer

Chloe, you see, has her own religious issues, stemming from an increasingly devout mother (Lea Thompson) who is getting on her nerves. She spills all this out to the smitten journalist before he leaves for London, coincidentally on the same flight piloted by her father, Rayford Steele (Nicolas Cage).

Once Buck and Ray get on board the plane, the movie starts to really resemble a ’70s disaster flick, right down to the quirky characters and flirtation between the pilot and leggy blonde flight attendant (Nicky Whelan as Hattie). Among the passengers: a deal-making businessman with a twang, a troubled drug addict, an angry little person (Martin Klebba), and the paranoid wife of a football player (Jordin Sparks).

When the Rapture occurs mid-flight, all heck breaks out: It’s a mighty challenge for Ray to get the frightened and bewildered passengers safely back home. As strange as it is to see the formerly gonzo actor in such an overtly Christian movie, Cage is a big step up from Brad Johnson, who played the role in the original version. His character leans heavily on Murray’s journalist, who has a calming influence on fellow passengers.

See video: Nicolas Cage Flies Through the Rapture in God-Awful ‘Left Behind’ Trailer

Back home, there’s plenty of chaos as well. The sudden departure of millions has endless repercussions on the highways and in the malls, where opportunists take advantage of the breakdown in the social structure.

The heavy-handed screenplay suggests that the departed were either devoutly religious or just young and pure. Co-writers Paul Lalonde and John Patus, who also wrote the original “Left Behind,” serve up bald lines about characters being taken to protect them.

But there are lighter moments that leaven the moralizing, and help make up for some of the holes in the plot.

“If she’s going to run off with another man, why not Jesus?” pilot Ray ruefully says to his daughter early on.

The $16 million movie culminates in a dramatic action scene that evokes classic disaster movies, and given how ham-handed it is, the satiric “Airplane!”

“Looks like the end of the world,” one character says towards the movie’s conclusion. “No, not yet,” another says ominously in a setup for a sequel.

If the movie weren’t so earnest about its faith it would almost be comical. Director Vic Armstrong is best known for his work staging action sequences, but has scant directing experience on feature films.

Co-writers Lalonde and Patus, who helped produce both versions of “Left Behind,” have said they wanted to remake the movie to open the story up to a broader audience. However, the Christian message is hammered home so bluntly it risks putting off any potential converts. And those not put off by that may find the production values equally repellant, or so bad they’re campy.

These stumbling blocks may not ultimately matter for the movie with its potential built-in audience. There are 16 novels in the series, which has racked up sales upwards of 60 million copies. The original “Left Behind” was a hit on home video, spawning two sequels before this remake, and subsequently released in theaters.

This time around, it’s reversing the order.

The true faithful may lap up “Left Behind.” The rest of us can always revisit “The Leftovers” or hold out for Ridley Scott‘s “Exodus,” arriving on the big screen before Christmas.