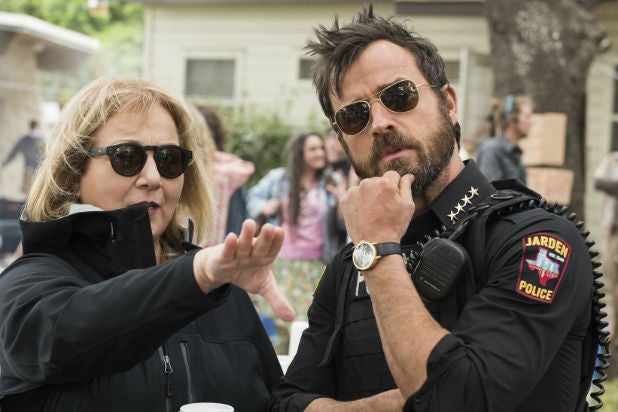 The third and final season premiere of HBO’s “The Leftovers” begins with a brief, isolated sequence about a 19th century cult — based on a real-life group led by William Miller, who claimed to know the date Jesus Christ would return to earth.

“Millerites,” as director Mimi Leder referred to them in an interview with TheWrap, accounted for approximately one million followers in the Northeast part of the country, who lived in preparation for their “ascent to heaven” between 1843-1844.

“It was so challenging to shoot, it’s a sequence with no words. The storytelling of their world was such a precursor to our Guilty Remnant,” Leder told TheWrap.

The Guilty Remnant is a menacing cult who act as primary antagonists in the world of “The Leftovers” — a show that poses that two percent of the earth’s population has vanished into thin air, with zero explanation as to why. The Guilty Remnant believes the event was “the rapture,” or a selection of pure souls called to heaven while the unworthy remainders hang out here and slowly go insane.

While Leder confirmed the opening sequence was a indeed based on Millerites, it was important that “we never say who they are or where they are. It could be any cult or sect that feels reminiscent — because they wear white robes and stand on roofs,” she said. The Guilty Remnant have a strict dress code of all white, chain smoke cigarettes and observe a vow of silence.

We see the Millerites in this episode through the lens of a small family — a devoted wife, husband and child encouraged by Miller’s teachings and ecstatic to see his math written plainly on a chalkboard heralding the arrival of Christ.

The family and their village dress in white robes, climb to the roofs of their cottages to be good and ready to get swept up to heaven. But Jesus doesn’t show.

Miller fine tunes his math and, as the village becomes more skeptical, the redheaded matriarch of the family holds strong to her faith. Once again, she mounts the roof, this time alone, and endures the pouring rain. For a second time, Jesus is no call. A no show.

Historically, the event is referred to as “The Great Disappointment.“

“It’s showing the connection of family and life, that we’re all leftovers,” Leder said. “It was important to make that statement as directly as we did.”

The Damon Lindelof-created series has seven episodes left, and airs Sundays at 9 p.m. Check back with TheWrap for more as the series, well, departs.