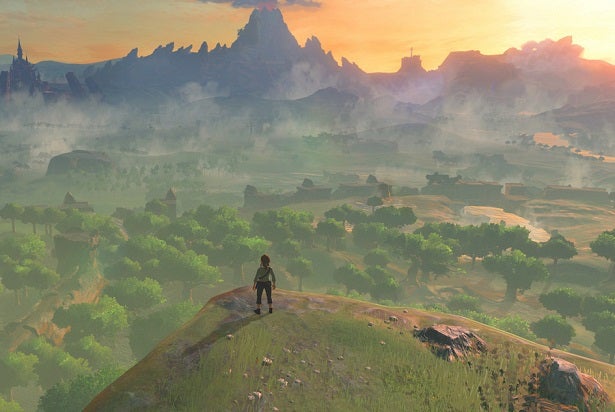 Video games these days have a big problem. Namely, they’re way too big.

The latest entry in Nintendo’s 31-year-old “Legend of Zelda” franchise came out last week, and it perfectly encapsulates that problem. Like lots of games, “Zelda” crowds a huge world full of cool things to do with a bunch of boring time-wasters. It’s a world so big that Nintendo couldn’t find a meaningful way to fill it. Which begs the question: did it ever actually need to be this big?

Like all the other “Zelda” games, “Breath of the Wild” is about a land called Hyrule, besieged by some ancient evil. Players take on the role of Link, the prophesied hero who, together with the magical Princess Zelda, will turn back that evil. Most of the game is about getting prepared for that final battle — running around the world, finding the people and weapons necessary to fulfill the prophecy.

That means you get to spend your time riding horses, shooting bows and dueling monsters. The land of Hyrule is an amazing, diverse place to explore, and you get to do it by surfing on your shield down hillsides or paragliding over canyons. A huge part of the appeal is the massive amount of area you’ll have to traverse and explore.

And, yet, “Zelda” and games like it have struggled to justify these huge, often-amazing spaces. Instead, they fill those fantasy worlds with boring junk to do — like picking stuff up off the ground.

“Zelda” games are always about exploring a huge place and discovering its secrets. Even in the first game back in 1986, players would wander Hyrule without much explanation or guidance, gathering better weapons, armor and tools. Legions of monsters big and small stand in the way, but ultimately discovery is what makes “Zelda” so appealing.

“Breath of the Wild” offers plenty of discovery. It covers what feels like a continent’s worth of in-game space and players set off with little direction to find out what’s out there. The idea of having a whole world to explore, and having that world open up in front of you with strange things waiting for you to find them, can be as exciting today as it was 30 years ago.

But what’s different about this moment in video games, as opposed to that of almost every other “Zelda” game that’s ever been released, is the state of the rest of video games. During the same week Nintendo launched its massive world-spanning adventure, Sony studio Guerrilla Games released one for the PlayStation 4, called “Horizon: Zero Dawn.” The details are surprisingly similar: a lone hero embarks on a discovery-filled quest across a massive world. Link carries a sword, shield and bow; Aloy, the protagonist of “Horizon,” wields a bow and a spear.

Both games (and most games in the “open-world” genre, as they’re known) give players a huge amount of space, a handful of activities to pursue, and the freedom to do whatever they want, whenever they want. And this is where “Zelda” starts to struggle. Nestled in a field of similar open-world games that’s getting more crowded by the second, “Zelda” can’t seem to shake loose of their worst ideas — even as “Breath of the Wild” climbs to take a spot among the “Zelda” series’ best entries.

“Breath of the Wild” can be pretty great at times. It really does provide that feeling of discovery, and that’s precisely because so much of the game is uncharted wilderness. Often you’ll have to climb to the top of something tall to get a look at the land and find places worth exploring. And almost undoubtedly, on the way, you’ll be diverted somewhere else. Those ruins in the distance look promising, but there’s a good chance you could stumble across a camp of monsters or maybe the lair of a dragon. A run-of-the-mill battle might see a plain of grass accidentally catching fire, becoming a whole new set of problems. What’s great about “Breath of the Wild” is that, even over hours and hours, you never really know what you’ll find or what might happen.

But for some reason, modern games — especially so-called “open-world” games like the new “Zelda” — feel the need to provide you with far more mundane activities to complete than epic, adventurous ones. “Horizon” has players hunting and gathering materials to make new medicine and weapons almost constantly. The same is true in similar games like “Far Cry Primal” and “Rise of the Tomb Raider.” “Making” is done by selecting options on the menu, reducing the task to about the same level of excitement as correcting the brightness on your TV. Even the 2015 blockbuster “Fallout 4” is as much about the menial task of gathering and carrying around garbage, which you can cobble together into other garbage, as it is about exploring and conquering a post-apocalyptic wasteland.

Also Read: 'The Witcher 3' Is Not Good Enough (Commentary)

And that’s the problem in “Breath of the Wild.” It’s a game that wastes your time on boring stuff. You constantly need to be on the lookout for replacement items for your essential equipment, because the swords, bows and shields you need to keep yourself alive break after just a few uses. When you’re hurt, the only way to heal yourself is to eat foods you find or cook. You’re always on the hunt for rare metals, because even if you don’t know what you’ll need them for, you know that, in this kind of video game, eventually you’ll need them. You can scale cliffs with your bare hands, provided the peak isn’t too high, since Link has a stamina meter that slowly depletes when he exerts himself and which keeps him from doing anything too trying. Even if you can make it to the top, you’re still subjected to watching Link inch along the stone surfaces at a glacial pace. It’s enough to make you want to put down the controller and check Twitter on your phone.

It’s strange that humans invented machines and tools to minimize the time and work they had to spend on tasks like feeding and clothing ourselves, just for video games to come along and make us do that work all over again — but with our thumbs and our capacity to ignore tedium instead of our muscles. The thing I can’t get over as I play “Breath of the Wild” is how much time it, and its brethren, want to waste. Developers take years to craft these huge worlds, and players are meant to get lost in them for tens of hours. But what does that size really add, except to the amount of time it takes to get anywhere? Where’s the fun in stopping the adventure to hunt boars and cook meals? Or running from fight because my sword broke in my hand and I haven’t got anything to fight back with?

Despite all the little tedious additions, Nintendo has created a pretty great “Zelda” game in “Breath of the Wild” — at least according to the meager standards that video games aspire to.

Even so, it’s still just the latest video game that proves that as technology makes more things possible, we’re still waiting for game creators to find something more exciting to do with it than letting players walk long distances over long periods of time, picking up garbage along the way.