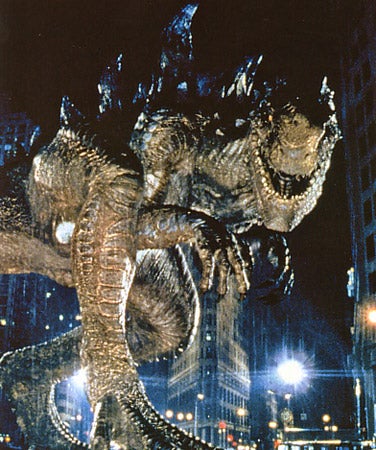 Score one for Bloody Disgusting.

Variety has confirmed the horror-centric website’s August 2009 report that "Godzilla" will be stomping back into theaters courtesy of Legendary Pictures, the fine folks who successfully rebooted the "Batman" series in 2005.

Legendary acquired the rights from Japan’s Toho Company, which has nurtured the "Godzilla" franchise for 55 years and 28 movies, beginning with the character’s first appearance in the 1954 film "Gojira." Legendary will co-produce and co-finance the film with Warner Bros., who is looking at a 2012 release which Toho will handle in Japan.

Not much is currently known about the project but if I were a betting man, I’d wager that Legendary will reach into its deep pockets, put all its chips on the table and release the film in 3D. I mean, isn’t Godzilla the ideal candidate to receive the (real, not converted) 3D treatment? This would be the perfect opportuntity to watch the radioactive fire-breathing monster wreak havoc and perhaps go head-to-head with a creature of equal or greater size.

I’ve always viewed Godzilla as the Japanese counterpart to America’s King Kong, but without the emotional schmaltz. I firmly believe the material can become a "Transformers"-sized property stateside, but it all depends on the filmmaker Legendary lures. When the studio tapped Christopher Nolan for "Batman Begins," his resume didn’t necessarily suggest he was the right man for the job, but now his name is synonymous with the franchise.

Legendary is planning to announce a director shortly, but allow me to beat them to the punch and kick-start the speculation by suggesting "Fast & Furious" filmmaker Justin Lin or Jan de Bont, the director of "Speed" and "Twister" who has been stuck in movie jail since 2003’s "Tomb Raider" sequel.

One thing is certain: America deserves a really great monster movie, rather than rehashed leftovers of the flesh-and-blood monsters featured in "Halloween," "Friday the 13th" and the upcoming "A Nightmare on Elm St." Director Matt Reeves came close with "Cloverfield," but ultimately, its monster didn’t have enough personality to make a lasting impression. Personally, I’d like to see Godzilla attack a coastal city besides New York or Los Angeles. AICN cleverly suggests Hilton Head, which would actually be a pretty cool idea, especially if Legendary could convince Tiger Woods to agree to a self-depricating cameo to help rebuild his image.

Godzilla has been absent from the bigscreen since 2004’s "Godzilla: Final Wars," but the last time most people saw the character was in Roland Emmerich’s 1998 disaster film. "Godzilla" disappointed at the domestic box office ( $136 million on a $130 million production budget), effectively killing the chance of a sequel (I’m sure star Matthew Broderick’s agent was just devastated), though the film wound up profitable (despite its excruciating 140-minute running time) due to the character’s enormous popularity overseas. It remains memorable for its indisputably awesome alternative soundtrack, which featured Puff Daddy’s "Come With Me", an ode to Led Zeppelin’s "Kashmir" featuring that band’s guitarist Jimmy Page, as well as Green Day’s "Godzilla" remix of its hit single "Brain Stew."