Actor Dominic Purcell, who plays Mick Rory, aka Heatwave, on DC’s “Legends of Tomorrow,” said he is “walking away” from the show, in an Instagram he posted on Friday night.

“Deal isn’t done,” he wrote. “I have no interest. What ever [sic] cash they throw on the corporate level. Im walking away from @cw_legendsoftomorrow. It’s been a total pleasure and a humbling experience bringing @dccomics iconic character #heatwave (aka) MICK RORY to life. I smashed this character– not an actor in the world could have done better.” 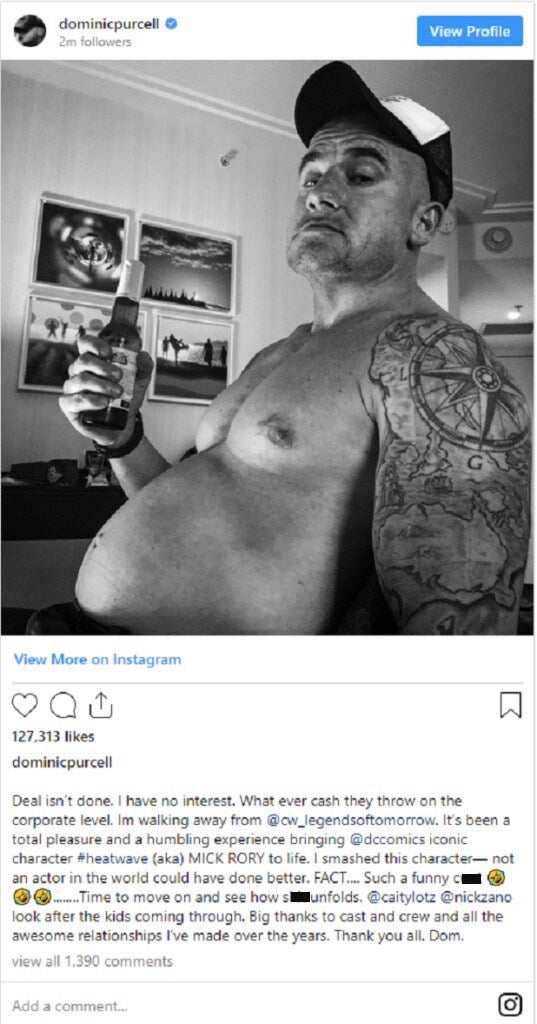 In his initial post Friday night, Purcell wrote, “The studio does not care. The actors [sic] work ethic and talent must give them the confidence to question authority. ….Much love to all. It’s not lost on me how very fortunate I am.”

After Purcell deleted that, he amended his post with a different ending, “Big thanks to the cast and crew and all the awesome relationships I’ve made over the years. Thank you all. Dom.”

On Saturday afternoon, in yet another revision of the post, Purcell, who is clearing trolling the press, wrote, “WHY SO SERIOUS. ??????????????????????????????????……. MY last post I needed a laugh. It was a joke and The press went nuts and yes I will always fuck with the press it’s fun watching them be click-bated– Truth is yes I am leaving @cw_legendsoftomorrow but will come back periodically, it’s a handshake deal with my boss Phil Klemmer. I don’t have a beef with studio ???? @warnerbrostv. I don’t have a beef with anyone except myself haha. …Shit woke up this morning like I’d caused mass #riots …. But what a genius negotiation move. I am loved.”

The sixth season of “Legends of Tomorrow” premieres on May 2. Just days after a Season 7 renewal was announced in February, Purcell posted on Instagram that he would be leaving the show at the end of that season when his contract is up. He previously said that he had no intention of leaving the show before then. However, that Instagram post was also deleted.

Reps for Warner Bros. Television and the CW declined the Wrap’s request for comment.