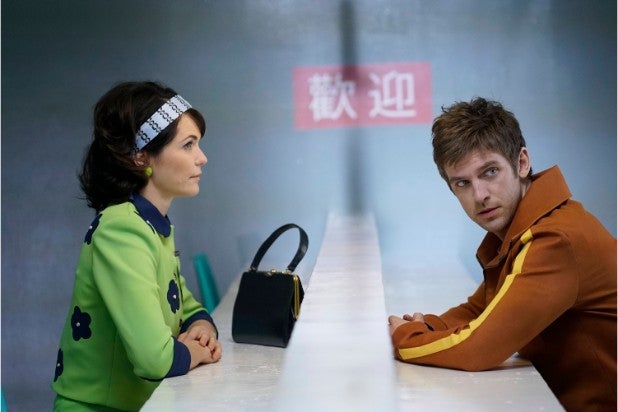 “X-Men” branding is all over FX’s “Legion,” a team-up with Marvel Entertainment to adapt the story of one of the “X-Men” universe’s most powerful mutants.

But watch the hour-long premiere and you might be wondering where, exactly, “Legion” fits into the nebulous “X-Men” continuity — or if it fits at all. The film series already has six main movies, plus spin-offs in “X-Men Origins: Wolverine,” “The Wolverine,” “Deadpool” and the upcoming “Logan.” And 2014’s “X-Men: Days of Future Past” used time travel to rewrite the film timeline, essentially splitting everything before it into one universe and the newest ones into another.

Despite having that “X-Men” X-in-a-circle logo spread around pretty liberally on the marketing materials for “Legion,” it’s still not exactly clear where in the timeline this story is going to fit — it’s not even really clear what year it is on the show. And official sources conflict on the matter, too. Longtime “X-Men” film director Bryan Singer said “Legion” is part of the “X-Men” universe as we know it, but it also operates as a standalone story.

There is a tidbit of information that adds a wrinkle to the whole discussion, however: In the “Legion” comics, David Haller (Dan Stevens) is the son of “X-Men” founder Professor Charles Xavier.

That’s a key bit of information the show is holding back so far, but executive producer Noah Hawley has said Professor X being Legion’s dad is still a part of the “Legion” lore. He also said that despite the connection to the “X-Men” films, fans shouldn’t expect to see James McAvoy, who has played a younger Professor X in the last three films (Patrick Stewart has played the older version, returning to the role in “Logan”), to show up in the first season.

“My hope is to create something that is so strong,” Hawley said, “that the people at the movie studio call up and go, ‘We’d be foolish not to connect these two things.'”

Also Read: 'Legion' Creator on How X-Men Spinoff Goes Where No Superhero Adaptation Has Gone Before

So where does that leave “Legion” in terms of “X-Men” continuity? It’s not clear where the series will go in relationship to the rest of the “X-Men” universe later in the season, but for right now, “Legion” is focused on Legion. And since “X-Men” has been willing to shift, alter and rewrite its universe and history a few times already, and it’s going to take a minute for everyone involved to figure out if and how all these various related pieces like “Deadpool” and “Legion” fit together.