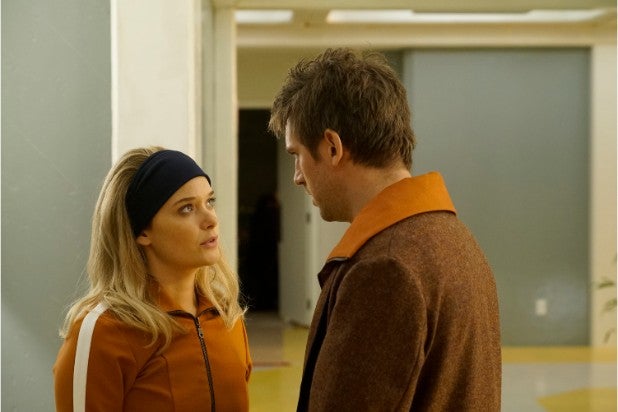 A big part of FX’s “X-Men”-related new show “Legion” is that it leaves viewers unsure what is real and what’s in protagonist David’s head. That goes double for one strange moment in the middle of the premiere.

The head-scratcher happens when David (Dan Stevens), a mental patient stuck in a hospital, finally touches his girlfriend Syd (Rachel Keller) for the first time. When David kisses Syd, the two experience a surge of power. When they both get over being a bit stunned, we realize what’s happened: Syd and David’s consciousnesses have switched bodies.

So, what’s the deal?

Syd has resisted being touched throughout the episode, and now we know why. Like David, she’s a mutant too — she shows up with a team of mutants to save David at the end of the episode. Syd is an original character to the show, so we don’t have any comics to go on to find out about her abilities. But it appears her mutant power is to switch bodies with anyone who she touches.

When that happens, we get a glimpse of David’s true power. As Lenny (Aubrey Plaza) notes, “you can’t give a newbie a bazooka and expect her not to blow stuff up.” Syd doesn’t know how to deal with David’s innate abilities. In the comics, Legion has the power to reshape reality to his will. That’s probably what we’re seeing in the hospital: Lenny has been fused into a solid wall, killing her, and all the doors on the rooms in the hallway literally no longer exist. That’s David’s latent mutant abilities going haywire with Syd unable to control them.

Also Read: 'Legion' has a Pink Floyd Connection You Might Not Have Noticed

Then again, David has no idea what’s real and what’s only in his mind. So maybe all the things David thinks he sees, and thinks have happened to him, aren’t real. The show doesn’t tell us one way or another — it’s possible the reason David is suddenly in his own body is because he hallucinated the whole ordeal. One thing that seems to be true is Lenny’s death, though. What really happened is for the audience to decide.