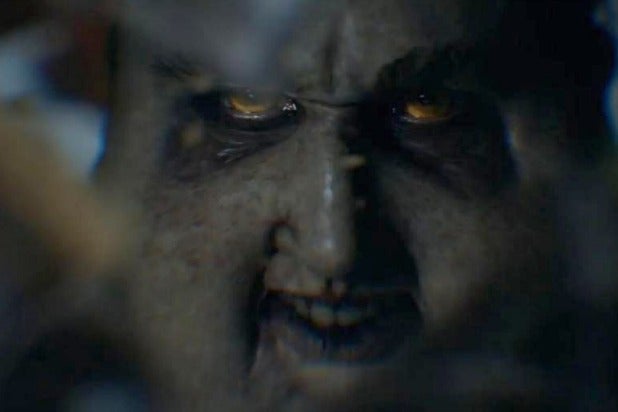 The Devil with the Yellow Eyes has been an ever-present fixture in the mind of “Legion” protagonist David Haller (Dan Stevens). While “X-Men” fans have been guessing the monster might be a certain villain Legion’s faced in the comics, this week’s episode comes pretty close to confirming it.

Since the first episode, the Devil has haunted David’s mind, but he’s not the only one. Aubrey Plaza’s character Lenny also floats around in David’s subconscious, despite seemingly dying in the first episode of the show. And last week, as Syd (Rachel Keller), Ptonomy (Jeremie Harris) and Kerry (Amber Midthunder) investigated David’s past, they discovered his childhood dog, King, was also a figment of his imagination.

Except none of those people (and one dog) are figments, as it turns out. As was finally made clear in Episode 5, they’re all one in the same thing: a creature inhabiting David’s mind. As Cary (Bill Irwin) puts it, the thing is a separate personality from David, but it’s also a parasite.

That Lenny, the Devil and King are all manifestations of the same presence is the giveaway: It seems extremely likely that David’s demon is the Shadow King, a powerful psychic supervillain from the “X-Men” comics in which the character of Legion features.

In the comics, much like in the show, Legion is an incredibly powerful mutant who struggles with multiple identities. Part of his mutant ability in the comics is to absorb the personalities of people around him in uncontrollable moments, which means there are actual separate people living inside him. The Shadow King is one of these entities, but it didn’t get there by accident because of Legion’s power.

Instead, it’s some kind of ancient psychic evil that can possess people, and during the comic book “Muir Island Saga,” it possess Legion, with disastrous results. The comic version of the Shadow King went up against the “X-Men” and Professor Charles Xavier and was eventually defeated and driven from Legion’s mind.

Also Read: 'Legion' Theory: Could Syd Be a Creation of David's Mind Made Real by His Powers? (Spoilers)

The “Legion” version of the Shadow King — if that’s who it is — is obviously pretty different, but there are similarities between the comic Shadow King and Lenny. But it does seem to be a separate entity from David, instead of a personality that split off in his mind. What the Shadow King’s ultimate goals are for David remain to be seen. But if the monster can get full access to David’s powers, like it did at Division 3, the other mutants are going to have a pretty tough time beating it.