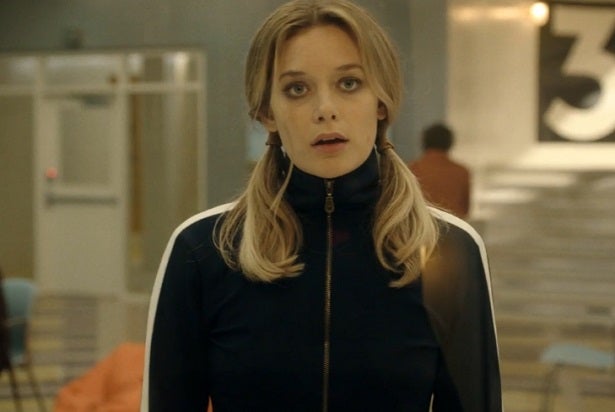 Three episodes into FX’s “Legion,” and it’s still not clear what in David Haller’s (Dan Stevens) life is real and what is imaginary. That confusion is lessened a bit by his time in Summerland, the mutant home/training facility run by Dr. Melanie Bird (Jean Smart), but “Legion” isn’t letting viewers off that easy.

The end of Episode 3 finds David opening his mind and memory to Dr. Bird, Ptonomy (Jeremie Harris) and Syd (Rachel Keller). They quickly find it a more dangerous place than they expected. And it’s during this attempt to find out what’s really going on with David that “Legion” creator Noah Hawley hits viewers with evidence that may well confirm a theory that’s floated around since the start of the show: that Syd, the body-switching mutant who has become David’s girlfriend, isn’t real.

“Legion” has spent its entire run so far toying with the viewer’s notion of reality within the show, because we’re seeing just about everything from David’s point of view. David is an untrustworthy narrator to both the audience and himself. He loses himself in memories, struggles to tell hallucinations from objective reality, and talks to people who aren’t there.

Syd has always been a bit suspect as a character, but her time spent in David’s mind suggests more than anything that she’s actually a part of him. When the other characters can’t see the threatening elements of David’s subconscious, like the Devil with the Yellow Eyes, Syd can. She follows a child version of David through the halls of his memory, and she’s able to communicate with and help him. Where the other characters venturing into David’s mind are passengers or tourists, in Episode 3, Syd is wholly in tune with what’s happening there. The only other person who can see what she sees while she’s in David’s mind is the child version of David himself.

All of Syd’s time and experience within David’s memory suggests she might not be visiting David’s mind, but that she’s a part of it. And that comes off a bit weird — Syd is a physical person who interacts with other characters, after all. She’s there, in the room, with Dr. Bird, Ptonomy and David. She’s not Tyler Durden of “Fight Club,” who is ignored by other characters unless he’s controlling Ed Norton’s body. Syd seems to be really there. So how can she be a projection of David’s mind?

Also Read: 'Legion': What's Up With David and Syd's Body-Switching?

That answer hinges on David’s powers, which we’ve only seen in small bursts. It’s clear that David is telekinetic and telepathic. In the comics from which “Legion” is adapted, he has other abilities, like pyrokinesis — the ability to control fire with his mind. And he can also control, and alter, the fabric of reality.

In essence, if David has the powers Legion does in the comics, he could actually will Syd into being with his mind. In the show, it seems he might have done that already, if accidentally.

In fact, we’ve already seen David’s reality-bending powers at work. He can teleport people and objects through walls and over distances, especially when he’s in trouble. And then there’s Lenny’s death in Episode 1, at Clockworks Psychiatric Hospital. When David and Syd switch bodies, Syd accidentally lets loose with David’s powers. David’s out-of-control abilities zap everyone into their rooms at Clockworks, but the doors have ceased to exist. They’re replaced by blank, sealed walls. Lenny (Aubrey Plaza), David’s friend, is killed when she’s actually fused into the wall — seemingly an accidental side-effect of Syd using David’s power to rewrite reality.

Everything else about Syd adds at least circumstantial evidence to the idea she might not be real. She refuses to be touched, and when David does touch her, she takes over his body. That sounds an awful lot like the comic story of Legion, who is so named because his body plays host to several personalities. All those personalities vie for control, and each one manifests different powers. Syd says she’s switched with other people, but we’ve only seen her switch bodies with David. It seems possible that what’s really happening is the Syd personality that David has created briefly takes over.

There are a few other clues about Syd’s unrealness spread throughout “Legion” as well. There are no records of Syd at Clockworks, for instance. That’s not too out there — David’s records seem to have disappeared as well, suggesting maybe Division 3 is covering up his existence. But then, the Interrogator in Episode 1 also tells David there are no records of Syd at the hospital. Why would the Interrogator lie to David about Syd’s records if he’s trying to track her down, and if his organization is the one that is covering up her existence?

And if David really can alter reality, it seems easy enough for his mind to supply Syd with memories and backstory, while also doing enough adjustments to the perception of people around him to make her seem real. Syd exists, but only as far as David creates her. That’s well within Legion’s powers in the comics, where he even rewrites reality to make himself a beloved hero. There are no records of Syd in the show because David has never had occasion to worry about the bureaucracy that would be involved in keeping track of her. He never considered the hospital would have records of Syd, so his mind didn’t create any.

Also Read: 'Legion': What Does the Story of the Woodcutter and the Crane Mean?

Syd being an imaginary concept doesn’t seem that far-fetched if you consider that Lenny might also be one. She always seems to appear at random around him, both when she’s alive and dead. It seems strange that Lenny is both David’s junky friend out in the world, and then gets committed to the same hospital he does. But her continued appearance to David, even after she dies, makes more sense if she’s always been part of his mind.

If Syd is indeed David’s construction, she would count toward the multiple personalities existing within him that are part of his story in the comics, but haven’t really popped up much in the show. And Syd’s identity would obviously have major repercussions for “Legion” going forward.

What do you think? Leave your own theories in the comments.