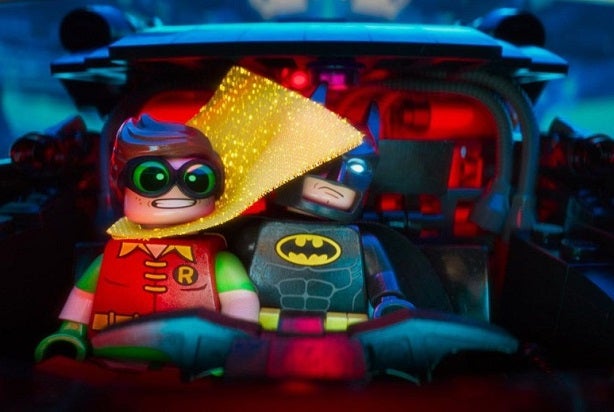 (Spoiler alert: Read on with caution if you haven’t watched “The LEGO Batman Movie”)

“The LEGO Batman Movie” pulls jokes from the whole history of Batman for its toy-inspired romp through vigilante justice. But it also takes the opportunity to reference two of its voice stars’ other beloved comedy venture: “Arrested Development.”

Before Will Arnett was the voice of LEGO Batman and Michael Cera took on the role of Robin, they were G.O.B and George Michael Bluth on the cult Fox series.

Observant “Arrested Development” fans will pick up on a great gag the new “LEGO Batman Movie” cracks in homage to the show — especially if they can speak Spanish.

When Batman accidentally adopts Dick Grayson, otherwise known as Robin, in the movie, he instructs the acrobatic youth not to call him “Dad.” Robin cycles through a handful of other names, finally landing on “Padre.” And later, at the end of the movie, Batman returns the favor — he calls Robin “Hijo.” It’s “son” in Spanish.

That’s a callback to one of the better jokes in the first season of “Arrested Development.” In that show, Michael (Jason Bateman), the responsible son of a mildly crooked family of completely clueless rich folks, falls in love with the girlfriend of his brother G.O.B., a failed magician. Michael and Marta plot for her to break up with G.O.B., but G.O.B. tells Michael he thinks Marta is cheating on him with someone named “Hermano.”

The running gag for some time, then, is that G.O.B. and Michael are trying to piece together who Hermano is. But “hermano,” of course, means “brother” in Spanish. Marta is referring to Michael all along.

There’s a great scene in which G.O.B. thanks Michael for his help by repeatedly calling him “brother” in various languages, like “mon frere” in French. He even remarks that he has no idea why he knows that, since he took four years of Spanish in high school.

“The LEGO Batman Movie” slips the reference in so effortlessly, even “Arrested Development” fans might not notice it. But given Arnett and Cera’s pedigree with the show — they even returned for a fourth season when Netflix revived the beloved series in 2013, seven years after it was originally canceled — Batman’s loving referral to Robin as “Hijo” can’t be a coincidence.