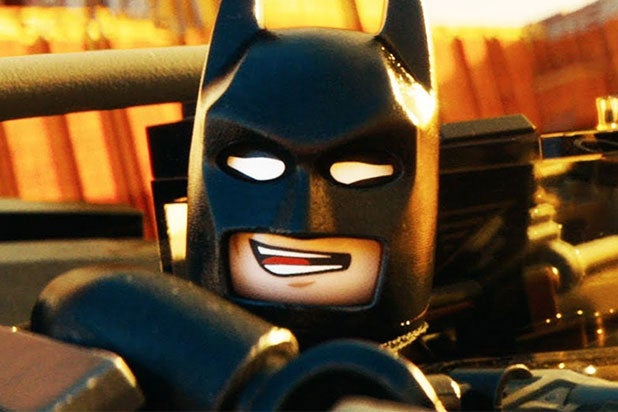 “The Lego Batman Movie” soared to the box office crown this weekend, bringing in $55.6 million at 4,088 locations, as a family audience helped carry the Warner Bros. film past Universal’s “Fifty Shades Darker.”

Will Arnett reprises his role as Batman from “The Lego Movie” in the film written and directed by Chris McKay. The voices of Zach Galifianakis, Michael Cera, Rosario Dawson and Ralph Fiennes also feature in the animated movie, which carries a 91 percent rating on Rotten Tomatoes.

“Lego Batman” began its run with a modest $2.2 million at the Thursday night box office and couldn’t pass “Fifty Shades Darker” on Friday, but its younger target audience apparently turned out during more family-friendly parts of the weekend. Warner Bros. had initially projected a $60 million opening weekend for “Lego Batman,” but others have forecast as much as $70 million.

Also Read: 'Lego Batman Movie' Is 'The Best Batman Film in Years' And 8 Other Soaring Reviews

Goldstein also expressed a lot of confidence that the movie would stay strong into next week, helped by Valentine’s Day and the Presidents’ Day long weekend.

“Family films do particularly well on Valentine’s Day,” he said. “And Friday, 70 percent of kids are out of school.”

Universal’s “Fifty Shades Darker” topped the Thursday and Friday charts, but slid into second place for the weekend, locking up $46.8 million at 3,710 locations.

The studio had projected  an opening weekend of $39 to $44 million for the “Fifty Shades of Grey” sequel, which “Darker” topped, but its opening weekend was significantly lower than the original. That one, which also starred Dakota Johnson and Jamie Dornan, opened to $85 million on Valentine’s Day weekend two years ago on its way to $571 million worldwide.

Lionsgate/Summit’s “John Wick: Chapter 2” blasted its way to a solid $30 million at 3,113 theaters, good enough for third place. Keanu Reeves stars as the eponymous hitman in the sequel to the 2014 original, which made $43 million domestically and another $43 million abroad. A stellar 91 percent Rotten Tomatoes rating and the fact that its two main competitors targeted different audiences likely helped contribute to that strong start.

The studio had initially projected an opening weekend in the mid-teens, but raised that bar as the film has been building momentum, with others estimating up to $31 million. Still, the movie’s actual gross more than doubled the performance of the first “John Wick,” which debuted to $14.4 million, making it one of the few sequels to outdo the original.

Universal’s “Split,” which had topped the box office the previous three weeks, placed fourth with $9.3 million at 2,961 locations. The movie has grossed $112.3 million domestically since its release.

M. Night Shyamalan’s thriller stars James McAvoy  as a man with 23 different personalities, a performance that has garnered plenty of accolades from those who have seen the film.

Best Picture nominee “Hidden Figures” finished fifth at the weekend box office, as the Fox film added $8.1 million over the weekend to take its total to $131.5 million. The movie stars Taraji P. Henson, Octavia Spencer and Janelle Monae as mathematicians and engineers who were instrumental in sending some of NASA’s first missions into space.